The United Nations High Commissioner for Human Rights said today that no country to date has achieved full equality between the sexes and urged the 47 members of the Human Rights Council “to do better than our societies” and make a real difference in achieving gender parity.

“Very frequently, we see a preponderance of women experts on panels that discuss issues specific to women and children – as if such issues could not be of deep concern to men,” Zeid Ra’ad Al Hussein said in his opening remarks to a panel discussion on gender equality held by the Council in Geneva.

“Conversely, discussions on situations of armed conflict, on counter-terrorism, on sanctions regimes, and on the death penalty almost seem as though they are reserved for men,” he noted.

The High Commissioner said “the lack of gender parity in UN human rights bodies may indeed be symptomatic of the under-representation of women in Member States,” adding that “we need to do better than our societies.”

He spoke of the importance of “visible equality.”

“Girls may stay away from computer technology or engineering because beating the boys in maths is seen as somehow ‘unfeminine,’” he noted, and “girls who grow up seeing only male presidents or ambassadors may develop a belief that power is essentially male.”

He said “quotas and other temporary efforts to achieve parity can help to bring women’s voices into legal and political systems, the corporate boardroom, the workplace and higher education,” leapfrogging a process that might otherwise take generations.

Saying “all of us have the power and responsibility to promote gender parity,” he urged action “to address discrimination, combat stereotypes, and promote equality” at the international and national levels.

“We must stop regarding parity as a token exercise, and grasp at last that equal representation of women and men, across themes and bodies, not only embodies but also builds more just societies,” he said.

For his part, the High Commissioner pledged that he will no longer take part in any panel discussion that does not include women experts, and committed to improving gender parity within his office.

At its 6th session, the Human Rights Council encouraged States to promote gender balance by taking all the necessary measures, including budgetary and institutional measures, to guarantee the full participation of women in medium- and high-level ranks, regularly nominating more women candidates for election and appointment to the human rights treaty bodies and mechanisms, international courts and tribunals, the specialized agencies and other UN organs. 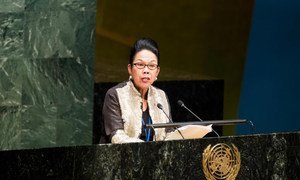 As the Commission on the Status of Women opened its 59th session today at United Nations Headquarters in New York, delegates heard a keynote address calling for a revival of the “spirit of Beijing” to tackle problems that have persisted since the adopted in 1995 of the landmark Beijing Declaration and Platform for Action on gender equality and women's empowerment.