The National Geographic Society, one of the largest non-profit scientific and educational institutions in the world that reaches more than 700 million people each month, is this year’s winner of the United Nations Champions of the Earth award in the area of science and innovation.

“In a year when the world aims to finalize the Sustainable Development Goals and sign a new agreement on climate change, the influence and leadership demonstrated by National Geographic is more important than ever,” said Achim Steiner, Executive Director of the UN Environment Programme (UNEP), in announcing the award.

The remaining laureates will be revealed throughout September, UNEP said, and the awards will be handed out at a ceremony at the close of the Sustainable Development Summit, to be held from 25 to 27 September at UN Headquarters.

“The National Geographic Society is a unique organization driven by a passionate belief in the power of science, exploration and storytelling to enlighten, excite and change the world,” Mr. Steiner said. “By engaging citizens and stakeholders in solutions-based thinking and dialogue, they directly address environmental issues that impact us all – from air quality and biodiversity to sustainable cities and ecosystem management.”

National Geographic has supported some of the most historic expeditions in the world, including the first explorers to reach the North Pole and the discovery of Machu Picchu – a lost mountaintop city of the Inca, in the Peruvian Andes, as well as critical species studies such as Jane Goodall’s chimpanzee research in Tanzania’s Gombe Stream Park and Dian Fossey’s mountain gorilla research in Rwanda.

Since its creation in 1888, UNEP said, the Society has funded thousands of research, conservation and education programmes around the globe to support the next generation of explorers and scientists as they push the boundaries of discovery and encourage citizen science.

And every month, National Geographic reaches more than 700 million people through its media platforms, products and events.

“The research, ground-breaking articles and stunning photography published in their magazines and publicized on television inspire people to care about the planet, giving them the transformational power to form opinion and influence the development trajectory of our planet,” according to UNEP.

The annual Champions of the Earth award is the highest environmental accolade that the UN can confer upon outstanding individuals and organizations. 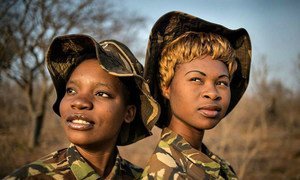 The Black Mamba Anti-Poaching Unit, a South African ranger group consisting mostly of women, has been named as one of the winners of the top United Nations environmental prize.