United Nations officials today shared a common message that building a culture of peace means not just ending conflict but building inclusive societies that are able to develop and thrive in the absence of discrimination.

“Today’s discussion is an opportunity to focus on what we need to do on our pathway to a new and prosperous future for all,” said Ambassador Einar Gunnarsson of Iceland, speaking on behalf of the President of the General Assembly, at the High-level Forum on a Culture of Peace.

“Experience has shown us that peace is not simply the absence of conflict,” he stated. “Peace requires equitable societies, inclusive education and tangible actions on the ground.

“More importantly, peace is a distant dream without development. This is part of the core challenge in promoting a culture of peace and ensuring peaceful societies.”

Mr. Gunnarsson also spoke of the need to create a national community to promote dialogue, enhance respect for religious and cultural diversity, and eliminate all forms of discrimination and intolerance, while developing policies to promote peace, security, the rule of law and democratic decision-making.

Today’s event was designed to highlight the importance of implementation of the Declaration and Programme of Action on a Culture of Peace that the Assembly adopted in September 1999 and the need to further strengthen global movements to promote a culture of peace.

Secretary-General Ban Ki-moon shared his thoughts on how to bring about a culture of peace, highlighting humanitarian crises around the world and violations of international human rights laws.

“Today’s meeting is about the very hard truths in our world,” he said, “where people are suffering and dying from violence and atrocity crimes.”

“Syria is the world’s worst humanitarian crisis today,” he said. “I have condemned the parties – especially the Government – for reported grave violations of human rights and international humanitarian law that may amount to war crimes and crimes against humanity.”

As well as speaking about war-torn regions, Mr. Ban noted: “Even in mostly peaceful, democratic societies, minorities are attacked for their race, sexual orientation or some other difference – when they should be embraced for our common humanity.”

He also paid tribute to those countries, communities and people who had shown compassion, rather than xenophobia and discrimination.

“We cannot build a culture of peace without an active campaign against division and injustice,” said Mr. Ban. “To be more than just soothing words, the culture of peace demands courageous practice.”

Arun Gandhi, a grandson of the late Mahatma Gandhi, delivered the keynote address at the meeting, and shared some of the knowledge he said he had gathered from one of the great leaders of the Indian independence movement.

“What I learned from grandfather is that each one of us contributes to violence all the time. Many times in ways we don’t even know and recognize,” he said. “Unless we individually transform ourselves and accept a non-violent way of life, we cannot create peace in the world today.”

He said that, in the words of his grandfather, “we must become the change we wish to see in the world,” adding that “unless we change ourselves and our attitudes, we are not going to be able to change the world at all.” 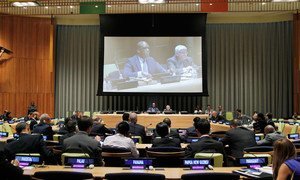 Underscoring that peace is more than just the absence of war, United Nations officials today stressed the need for concerted efforts to achieve the common vision of a life of dignity and well-being for all.