Fighting erupted over the weekend in northern Mali’s Kidal region between armed groups, breaking the ceasefire and prompting the United Nations Multidimensional Integrated Stabilization Mission in the country, known as MINUSMA, to issue a firm condemnation.

“Pending the conclusions of the investigation team today dispatched to Anefis, MINUSMA condemns in the strongest terms these acts, perpetrated in blatant violation of ceasefire agreements and of the Agreement for Peace and Reconciliation in Mali”, to which both rival groups – the National Movement for Liberation of the Azawad (MNLA) and the Plateform Coalition – are signatories.

Fighting resumed on August 15 in the town of Touzek Oued, located at the south-east of Kidal and between Tabankort and Anefis, also in the North Mali, points out a press release.

“The international community, as well as the population, is concerned by the increasing number of these violations, which could hinder the progress made towards a stable and lasting peace in Mali.”

MINUSMA reminded the parties that they will have to answer for their actions before the Security Council, which, on 29 June, said that it would consider targeted sanctions against those who obstruct or threaten the implementation of the Peace Agreement.

Urging the armed groups to immediately cease fighting, the Mission, adds the statement, stresses that it will not hesitate to take “all necessary measures” to protect civilians, in accordance to its mandate and rules of engagement. 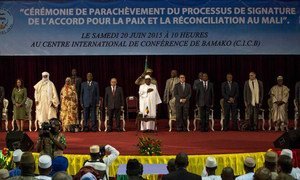 UN Secretary-General Ban Ki-moon welcomed Saturday the signature, earlier today, of the Agreement for Peace and Reconciliation in Mali by the Coordination coalition of armed groups in Bamako.