UNICEF Burundi/Eliane Luthi
Children at a temporary shelter in Bujumbura, Burundi, use drawing to help them forget the turmoil they have gone through.
6 August 2015

During their phone conversation yesterday, Mr. Ban expressed his “deep concern” over the impact of these events on security in Burundi, UN spokesperson Stéphane Dujarric told reporters in New York.

“The Secretary-General urged the President of Burundi to resume the political dialogue, which has been suspended since July 19th. He encouraged the Burundian authorities to work closely with the Ugandan-led facilitation on behalf of the East African Community.”

The Secretary-General offered the UN’s full support to help find a peaceful solution to the grave problems facing the country, the spokesperson added.

Also yesterday, the Burundi Configuration of the UN Peacebuilding Commission (PBC) strongly condemned the assassination of General Nshimirimana, and the attack against Mr. Mbonimpa, while voicing concern about the deterioration of the security environment.

“The PBC Burundi Configuration calls on all Burundians to exercise restraint in order to prevent a further escalation of violence” and “to establish the necessary conditions for rebuilding trust and fostering national unity,” said the statement.

The group also called on the Government and political actors in Burundi to urgently resume dialogue. 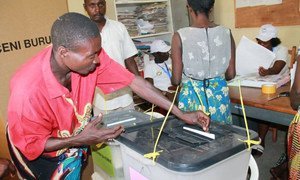 Secretary-General Ban Ki-moon today voiced concern over the situation in Burundi, where the security situation continues to worsen following the recent elections, and strongly condemned the assassination yesterday of General Adolphe Nshimirimana.