World Bank/Arne Hoel
Fetching water at a borehole in the village of Bilinyang, near Juba, South Sudan.
2 August 2015

United Nations Secretary-General Ban Ki-moon has praised UN Member States for reaching agreement on the draft outcome document that will constitute the new sustainable development agenda, which will be formally adopted by world leaders in New York this September.

“Transforming our World: The 2030 Agenda for Sustainable Development” encompasses a universal, transformative and integrated agenda that heralds an historic turning point for our world. This agreement results from a truly open, inclusive and transparent process,” the UN chief said in a statement issued this evening.

Concluding a negotiating process that has spanned more than two years with the unprecedented participation of civil society, the 193 Member States agreed to an ambitious agenda that features 17 new sustainable development goals that aim, by 2030, to eradicate extreme poverty, promote prosperity and people's well-being, while protecting the environment.

“This is the People's Agenda, a plan of action for ending poverty in all its dimensions, irreversibly, everywhere, and leaving no one behind. It seeks to ensure peace and prosperity, and forge partnerships with people and planet at the core. The integrated, interlinked and indivisible 17 Sustainable Development Goals are the people's goals and demonstrate the scale, universality and ambition of this new Agenda”, stated Mr. Ban.

More than 150 world leaders are expected to attend the Sustainable Development Summit at the UN Headquarters in New York, from 25 to 27 September, to formally adopt the outcome document agreed this weekend. “I look forward to joining Heads of States and Government, civil society, faith and business leaders, and peoples around the world for the adoption of this new agenda in the historic Summit in New York, » added the UN chief.

The new sustainable development agenda builds on the success of the eight Millennium Development Goals (MDGs), which helped more than 700 million people to escape poverty over the past 15 years and aimed at an array of issues that included hunger, disease, gender inequality, and access to water and sanitation by 2015.

The broader sustainability agenda go much further, addressing the root causes of poverty and the universal need for development that works for all people. “We are resolved to free the human race within this generation from the tyranny of poverty and want and to heal and secure our planet for the present and for future generations,” states the text.

“We are determined to take the bold and transformative steps which are urgently needed to shift the world onto a sustainable and resilient path. As we embark on this collective journey, we pledge that no one will be left behind,” the Member States continue.

Highlighting poverty eradication as the overarching goal of the new development agenda, the outcome document fully integrates the economic, social and environmental dimensions of sustainable development and calls for action by all countries, poor, rich and middle-income.

The 17 sustainable goals and 169 targets aim at tackling key systemic barriers to sustainable development, such as inequality, unsustainable consumption and production patterns, inadequate infrastructure and lack of decent jobs. The environmental dimension of sustainable development is covered in the goals on oceans and marine resources and on ecosystems and biodiversity, bringing core issues into the goal and target framework.

Member States stressed that the desired transformations will require a departure from “business as usual” and that intensified international cooperation on many fronts will be required. The agenda calls for a revitalized, global partnership for sustainable development, including for multi-stakeholder partnerships, as well as for increased capacity building and better data and statistics to measure sustainable development.

Providing an effective follow-up and review architecture, the agenda will include a Technology Facilitation Mechanism to support the new goals, based on multi-stakeholder collaboration between Member States, civil society, business, the scientific community, and the UN system of agencies. Agreed at the Third International Conference on Financing for Development, which took place last July in Addis-Ababa, the Mechanism will have an inter-agency task team, a forum on science, technology and innovation, and an online platform for collaboration.

The successful outcome of the Addis Conference gave important positive momentum to the last stretch of negotiations on the sustainable development agenda. It is expected that the consensus reached on the outcome document will provide momentum for the negotiations on a new binding climate change treaty to culminate at the Climate Change Conference in Paris, from 30 November to 11 December 2015. 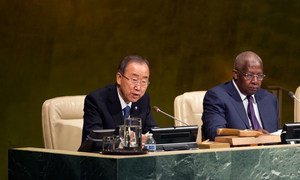 The United Nations General Assembly today endorsed the new global action agenda for financing sustainable development adopted two weeks ago by a major UN conference, and Secretary-General Ban Ki-moon welcomed the move as a major step that firmly puts the world “on the path to a more prosperous, just and sustainable world for this and future generations.”