Ahead of Yemen ceasefire, UNICEF sounds alarm about impact of crisis on children

Yemen's humanitarian crisis has reached a new low amid disintegrating health services and the spread of infectious disease among children, the United Nations Children's Fund (UNICEF) confirmed today just hours before a ceasefire aimed at facilitating the delivery of critical relief is slated to begin.

Speaking to reporters earlier this afternoon in Geneva, UNICEF spokesperson Christophe Boulierac explained that the UN agency and its partners were stepping up a series of initiatives targeting Yemen's struggling children, including nutrition screening, vaccinations and other life-saving interventions.

In the southern city of Aden, for instance, UNICEF had supplied emergency ambulances, as well as blood testing and transfusion services to ensure that injured children could receive immediate treatment.

Mr. Boulierac added that the UNICEF team in Aden was also currently supporting an immunization campaign as part of a nation-wide drive aimed at vaccinating around one million children under the age of one against measles, polio and other vaccine-preventable diseases.

“Our mobile teams and staff have to brave extremely hazardous conditions, risking their lives to reach children and women wherever they can. If they don't do that more children are likely to die from malnutrition and preventable diseases,” Julien Harneis, UNICEF Representative in Yemen said in a press release.

“But what Yemen really needs now is a return to peace, a solution to the fuel and power crisis and restoration of regular health services”, Mr. Harneis added.

According to the latest UN data, the humanitarian crisis in Yemen has been steadily deteriorating since the outbreak of fighting in late March 2015.

In the past three months alone, some 3,000 Yemenis have been killed, half of them civilians, and 14,000 others injured. Over a million people have had to flee their homes and 21 million need immediate help, close to 13 million people are unable to meet their food needs, 15 million people have no healthcare and outbreaks of dengue and malaria are raging unchecked.

Humanitarian partners have reached 4.4 million people with aid in the past three months, but this is a fraction of those in need, says the UN Spokesperson's office. The United Nations, the Red Cross/Red Crescent movement and international non-governmental organizations working together have now activated the highest level of emergency response.

At the same time, just yesterday, UN Secretary-General Ban Ki-moon announced the beginning of a humanitarian pause on Friday, 10 July, to permit humanitarian actors to reach civilians in need.

Today, the UN Security Council welcomed the announcement and emphasized that all parties would need to suspend military operations during the pause and that no party should take advantage of the pause to move weapons or seize territory.

The announcement of the pause comes at a critical moment for Yemen's children, according to the UNICEF spokesperson who reported that more than 2.5 million children were at risk of diarrhoeal diseases, half a million were at risk of severe acute malnutrition, more than 1.3 million children faced the threat of acute respiratory tract infections and 2.6 million of them under the age of 15 were not protected against measles.

To that point, Mr. Boulierac reiterated the UN's call all parties to enable the urgent delivery of food, water and medical attention to the most vulnerable populations in Yemen during the pause.

Also addressing the briefing was World Food Programme (WFP) spokesperson, Elisabeth Byrs, who cited the agency's efforts over the past months in reaching close to 2 million people with emergency food aid. 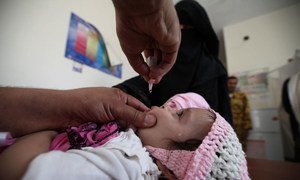 The United Nations human rights office is among several key UN entities voicing deep concern over the worsening human rights and humanitarian situation in Yemen that has more than 1,500 civilians dead, 3,600 injured and 1 million displaced in three months of violence.