UNICEF/Cody Griggers
In Liberia, adolescent girls trained by UNICEF and partners are part of Adolescents Leading the Intensive Fight against Ebola, or A-LIFE.

8 July 2015
The origin of the new cluster of Ebola cases is “not yet well understood,” the United Nations World Health Organization (WHO) said today about the outbreak in West Africa where a residual lack of trust in the response means that some cases still evade detection for too long, increasing the risk of further transmission.

There were 30 confirmed Ebola cases reported in the week ending 5 July: 18 in Guinea, 3 in Liberia, and 9 in Sierra Leone, according to the WHO weekly update on Ebola, which notes that “significant challenges remain” in the fight to eradicate the disease, which has affected some 27,600 people, including more than 11,000 deaths.

WHO reported on Tuesday that the 6th meeting of the International Health Regulations Emergency Committee regarding the Ebola outbreak in West Africa advised that the outbreak continued to constitute a public health emergency of international concern and that exit screening should be continued in the three most-affected countries, namely Guinea, Sierra Leone and Liberia.

The Committee had also advised those countries to strengthen cross-border collaboration and communication, particularly between Guinea and Guinea Bissau.

Also in its weekly update, WHO said improvements to case investigation and contact tracing, together with enhanced incentives to encourage reporting and compliance with quarantine measures have led to a better understanding of chains of transmission.

This, in turn, has resulted in a decreasing proportion of cases arising from as-yet unknown sources of infection” particularly in previously problematic areas such as Boke and Forecariah in Guinea, and Kambia and Port Loko in Sierra Leone, the agency said.

The chief of the UN Mission for Ebola Emergency Response (UNMEER) Peter Graaff, meanwhile, travelled to Port Loko today to get an update.

“A residual lack of trust in the response among some affected communities means that some cases still evade detection for too long, increasing the risk of further hidden transmission,” WHO said, adding that “the exportation of cases to densely populated urban areas such as Freetown and Conakry remains a risk, whilst the origin of the new cluster of cases in Liberia is not yet well understood.”

The conference held in cooperation with the Governments of Guinea, Liberia and Sierra Leone, and in partnership with the African Union, the African Development Bank, the European Union and the World Bank, will focus international attention on the need for targeted investments to support recovery priorities over a 24-month time frame.

Such investments are expected consider the broader risk landscape that includes health, governance and peace building within the three countries and the Mano River sub-region.

The conference offers an opportunity to discuss detailed country-based and regional anti-Ebola strategies, and provide a platform to secure pledges of international support that can complement African Union-led efforts and help fill technical and resource gaps. 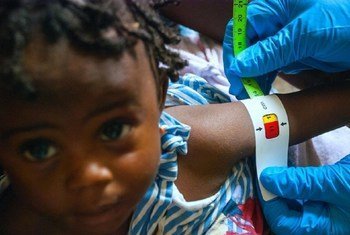 After missteps on Ebola, WHO must re-establish itself as 'guardian of global public health' – review panel

7 July 2015
The United Nations World Health Organization (WHO) has welcomed the report issued today by a panel of experts tasked to look into the agency's response to the unprecedented 2014 Ebola outbreak, which said that WHO needs to re-establish its pre-eminence as the guardian of global public health and that this will require it to make significant changes throughout, with strong political and financial support from Member States.