The senior United Nations official who will act as head of the upcoming Third International Conference of Financing for Development, to be held in the Ethiopian capital, Addis Ababa, announced today that among the meeting's “concrete deliverables” would be a commitment to establish a new technology bank for the least developed countries by 2017.

“The Third International Conference on Financing for Development next week will be the first of three major global events taking place this year, followed by the September summit in New York for the adoption of a new set of sustainable development goals (SDGs) and a conference in Paris in December to reach a universal climate change agreement,” said Wu Hongbo, who is the UN Under-Secretary-General for Economic and Social Affairs.

“These…events will shape international cooperation for years to come,” Mr. Wu told reporters at UN Headquarters in New York, and the conference, which will run from 13 to 16 July, will set a framework for financing sustainable development over the next 15 years.

Noting that the Addis Ababa conference will be held at the “highest political level,” he said about 30 Heads of State and Government, and Deputy Prime Ministers will be attending, together with more than 110 Ministers of Finance, Foreign Affairs and Development Cooperation.

In addition, he said, approximately 1,000 representatives from civil society and the business sector are expected to be in Addis for the conference.

Mr. Wu said the outcome of the conference will be a comprehensive package in support of the SDGs to be adopted in September.

“The framework will be ambitious and universally inclusive,” he said. “No one should be left behind.”

While UN Member States are still completing negotiations on the outcome document, it will address all three dimensions of sustainable development, cover all sources of development finance – public, private, domestic, international – and strengthen policy environments at national and international levels, he said.

“Taxation and aid feature prominently in the draft outcome document,” according to Mr. Wu, who will be the Secretary-General of the Addis Ababa conference. “In addition, all States see the importance of technology, innovation and capacity building.”

“In terms of concrete deliverables,” he said, the draft 'action agenda' thus far calls for a new social compact between governments and their people to deliver social protection and essential public services for all, including health, education, energy, water and sanitation.

“It also includes a package of proposals for least developed countries, including deliver increased aid, steps to amplify foreign direct investments, and a commitment to establish a new technology bank for the LDCs [least developed countries] by 2017,” he said, adding that the draft outcome includes the establishment of a Technology Facilitation Mechanism to help facilitate development, transfer and dissemination of relevant technologies for the SDGs.

Mr. Wu also told reporters of the importance of coming up with a “useful” basket of policy recommendations for governments from which to choose and for which to be able to mobilize financing.

And the agreement to be adopted in Addis Ababa needs a strong accountability and follow-up mechanism, he added. 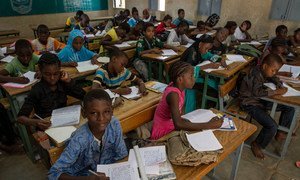 In 2002, the global community came together in Monterrey, Mexico, to address key financial issues affecting global development. The International Conference on Financing for Development, the first United Nations gathering of its kind, resulted in a landmark global agreement in which developed and developing countries recognized their responsibilities in key areas such as trade, aid, debt relief and institution-building.