UNMEER/Simon Ruf
In Ebola-affected Liberia, the International Organization for Migration (IOM) set up this mobile clinic to provide basic healthcare services to about 1400 people in Gbaigbon and neighboring communities in Bomi County.
1 July 2015

The World Health Organization (WHO) today reported that Ebola had resurfaced in Liberia after a teenager who died earlier this week tested positive for the disease in the West African country that had been declared free of Ebola transmission just two months ago.

Liberia has to wait for the incubation period of 42 days without new cases of transmission of the virus to confirm it was again free from Ebola, according to WHO.

“The re-emergence of Ebola in Liberia shows importance of staying vigilant. We must stay focused until we reach zero cases,” said the UN Mission for Ebola Emergency Response (UNMEER). ”The Ebola outbreak in West Africa is not over. We must stay engaged until the job is done.”

WHO, in its weekly update on Ebola, reported that on 29 June, routine surveillance detected a confirmed case of Ebola in Margibi County, Liberia – the first new confirmed case in the country since 20 March.

The case is a 17-year-old male who first became ill on 21 June, the update said. After presenting at a local health facility the patient was treated for malaria and discharged. He died on 28 June and received a safe burial the same day. An oral swab taken before the burial subsequently tested positive twice for EVD [Ebola virus disease].

So far, 102 contacts have been identified, although that number is expected to increase as investigations continue, WHO said.

“At this stage the origin of infection is not known,” according to WHO. “The case reportedly had no recent history of travel, contact with visitors from affected areas, or funeral attendance.”

WHO said there were 20 confirmed cases of Ebola reported in the week to 28 June, the same as the previous week, including two new health worker infections in Boke, Guinea, bordering Guinea-Bissau.

To date, there have been a total of 27,514 reported cases of Ebola in Guinea, Liberia and Sierra Leone with 11,220 reported deaths, the UN health agency reported. 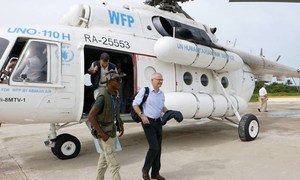 The head of United Nations mission for Ebola response has begun a visit to take stock of prevention and preparedness efforts in Guinea Bissau, which remains at high risk given its proximity to Guinea where new cases of the virus were reported in an urban area bordering the two countries.