OCHA/Caroline Birch
Hadjara, 8, fled a Boko Haram attack against Baga in Nigeria with her family. She was shot during the attack and her arm had to be amputated at Baga-Sola hospital in Chad.
1 July 2015

Describing a pattern of vicious and indiscriminate attacks by Boko Haram in north-east Nigeria that stretched back years, the United Nations human rights chief today urged the international community to help the subregion begin to repair the damage, and specifically appealed to Nigerian authorities to ease abortion restrictions for women and girls who had been sexually enslaved, raped and forced into so-called "marriages” by Boko Haram fighters.

In a briefing to the UN Human Rights Council, on Boko Haram's rights violations and abuses, High Commissioner for Human Rights Zeid Ra'ad Al Hussein discussed the findings to date by a 12-member team he dispatched to the Far North Region of Cameroon, southern Niger and the north-eastern regions of Nigeria. The team plans to visit Chad next, and a full written report, he said, would be presented to the Council in September.

“However, it has already become clear that the violations committed by Boko Haram are extensive and far-reaching, demanding a response of commensurate magnitude,” Mr. Zeid said.

“Survivors in Nigeria have given my staff distressing witness accounts of gruesome mass killings of men and boys whom Boko Haram grouped together and gunned down or hacked to death with sadistic cruelty, before the female inhabitants of villages were abducted,” he said.

In addition, “interviews have also confirmed that during their captivity – lasting in many cases for months or even years – women and girls have been sexually enslaved, raped and forced into so-called 'marriages'". Many survivors of these horrific experiences are now pregnant by their rapists,” he said.

He opened his remarks by telling the Council that it is encouraging to see governmental control being re-established over key areas of Nigeria. “These improvements in the immediate security situation give us hope for peace, and that the authorities will be able to address the root causes of this crisis,” he added.

The High Commissioner then focused on concerns about the plight of adults and children who had been freed from captivity by Boko Haram.

“I'm dismayed by reports that adults, and even children, who have been held captive and even enslaved by Boko Haram for months – and who have been delivered from captivity by government forces – are being subjected to detention, sometimes for lengthy periods, without charges,” he said.

“The case of 84 children from what was initially said to be a Boko Haram training camp in Girvidig, in Cameroon, has been a particularly shocking example,” he said. “These boys, aged between 7 and 15, were apprehended by the security forces in December 2014, and were sent for evaluation.”

“Only last Friday – after six months of detention in near-starvation conditions – were some 30 of these children released to their families,” he said and urged the authorities to resolve the situations of the remaining boys as swiftly as possible.

The High Commissioner also drew attention to the situation of many formerly captive women and young girls who are pregnant and their reported wish to terminate these unwanted pregnancies.

“I note that abortion is legal in Nigeria only when the life of the woman is at risk,” he said. “Human rights mechanisms have consistently called for ensuring access to safe abortion services beyond the protection of the woman's life, including in cases of rape and to preserve the health of the woman.”

“Taking this into account, I strongly urge the most compassionate possible interpretation of the current regulations in Nigeria, to include the risk of suicide and risks to mental health for women and young girls who have suffered such appalling cruelty,” he said.

He also insisted on the need for greater attention to human rights by both the military and the police forces in concerned countries when carrying out security operations against Boko Haram.

“Protection of civilians must be a paramount concern in all military operations, with respect for the strict rules of engagement that protect human rights and international humanitarian law,” he said.

The High Commissioner also said that “Member States, donors and the UN Country Teams can and should begin focusing programmes to meet the needs of the people of the sub-region – to repair the damage caused by Boko Haram, and to ensure that such a movement can never again take hold,” Mr. Zeid concluded. 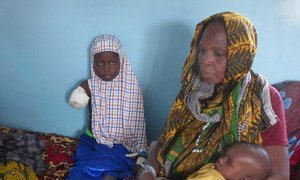 Secretary-General Ban Ki-moon has strongly condemned a series of deadly bombings in the Chadian capital of N’Djamena which reportedly killed more than 25 people and injured dozens of others, according to a spokesperson for the United Nations.