While some 16,000 new cases of cholera have been reported in Haiti so far this year, the disease is now under control but it will not be eradicated unless improving water and sanitation conditions are given a higher priority by both the Government and donors, says the outgoing United Nations official tasked with leading the response to the outbreak.

“And in today’s world, in the 21st century, it’s not acceptable to have this huge number of cases of cholera,” Pedro Medrano Rojas said in an interview with the UN News Service, as he wrapped up his assignment as UN Senior Coordinator for the Response to Cholera in Haiti.

Any country with this number of new cases of cholera would declare it an “emergency,” added Mr. Medrano, who served in the post for two years.

“This is what we are trying to convey to donors and to the international community” so that they will contribute more towards the eradication of the largest epidemic in the Western Hemisphere. Currently, only about 20 per cent of the $2.2 billion needed for the 10-year national plan to eliminate cholera is available.

Mr. Medrano, who has been responsible for strengthening overall coordination among UN entities and mobilizing a coherent and effective response by the international community, recalled that in the 1990s there had been an outbreak of cholera in the Latin American region that started in Peru. It had taken almost 10 years to eliminate cholera at that time.

Comparing the water and sanitation infrastructure in the 20 countries in the region that were affected back then, where over 80 per cent of people had access to water and adequate sanitation, Mr. Medrano noted that “Haiti has a third of that.”

“So we need to do a robust investment in water, sanitation and health, and this takes time,” he said.

“So we have to be able to treat the cases, the emergency response, and we can control it and save lives. But what is really important is to have the infrastructure – in water and sanitation in particular – which has not been the priority of the international community for many decades.”

About the current situation, Mr. Medrano said that when compared with 2010, the peak of the epidemic, there has been a 90 per cent reduction in the number of cases and to date, “we have the lowest number of new cases.”

“So I think that we can say we have been able to control it, not eradicate it,” he said.

“Vaccinations are not the solution but it can help to prevent further cases of cholera, but more importantly, it will save lives,” he said. “It is a complementary intervention. The medium- and long-term interventions are more related with infrastructure in health, water and sanitation.”

However, Mr. Medrano’s outgoing message was a positive one.

“I am confident that this cholera epidemic will be eliminated,” he said. “This is something, as I said before, [that] can be eliminated, with the support of everybody, in particular the international community and Latin American countries. They could do more. And this would be my appeal to them.” 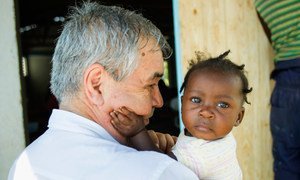 The cholera outbreak in Haiti remains the largest in recent world history, according to the United Nations official coordinating the Organization’s cholera response in the country, yet the health crisis has fallen off the international agenda after having ceased appearing in the media.