The international community must redouble its efforts to help the Central African Republic to fully realize its transition to peace, national reconciliation, reconstruction and the end of impunity, the United Nations independent expert on the human rights situation in the country said today.

“The Central African Republic has demonstrated its commitment in favour of peace, national reconciliation and justice in adopting the Republican Pact at the end of Bangui Forum, which defines a consensual road map for the country,” Marie-Thérèse Keita Bocoum acknowledged, calling on all parties to pursue their efforts to implement the Pact and fulfil people’s expectations.

Back from a seven-day visit to the country earlier this month, she praised the Central Africans for the important steps taken in favour of peace, national reconciliation and to fight against impunity, noting that an electoral calendar has been set.

Nonetheless, the independent expert warned of “many challenges.”

With the support of UN Multidimensional Integrated Stabilization Mission in the Central African Republic (MINUSCA), national authorities were able to launch an important signal regarding the fight against impunity during the arrests of three prominent leaders of rebel groups late 2014 and early 2015, she reminded.

“However, those responsible for the most egregious violations of human rights must be apprehended rapidly for the fight against impunity to be effective and to avoid negative impact on the socio-political climate, as it was the case in the past.”

The expert also emphasized that the provision of identity cards and registration of displaced persons and refugees during the census, as well as their participation in the elections will be significant challenges but “essential to the legitimacy of the election.”

Despite recent agreements on the cessation of hostilities and a disarmament, demobilization and reintegration program, Ms. Keita Bocoum expressed concern at ongoing acts of violence perpetrated by armed elements against civilians.

In addition, too many detainees are held without charge and many others are awaiting trial far beyond the deadline, with no access to adequate health care, she deplored.

The independent expert also urged the authorities to arrest individuals responsible for acts of torture and cruelty against people accused of witchcraft, often vulnerable women. “During my last visit, I had already warned the authorities about these unacceptable practices, contrary to national and international laws.”

Warning against the insufficient presence of the State outside the capital, Bangui, she went on to say that in the city of Bria, for example, there is still no judicial authority and only one single police commissioner supported by four policemen.

The expert finally stressed the importance of taking all necessary measures to protect children against violence and abuse, especially those who are vulnerable, for example in the displacement camp of Mpoko. “When violations are reported, the responsible authorities must protect victims from further harm, prosecute the alleged perpetrators and provide reparations.” 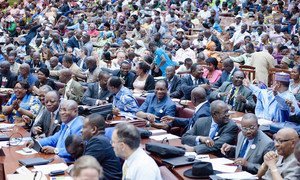 The United Nations Peacebuilding Commission has called on all stakeholders in Central African Republic (CAR) to help promote an environment conducive to holding elections ahead of the country’s upcoming parliamentary vote.