UNMEER
Head of the United Nations Mission for Ebola Emergency Response (UNMEER) Peter Graaff (right) arrives in Guinea-Bissau after new cases were reported near the border with Guinea.
24 June 2015

The head of United Nations mission for Ebola response has begun a visit to take stock of prevention and preparedness efforts in Guinea Bissau, which remains at high risk given its proximity to Guinea where new cases of the virus were reported in an urban area bordering the two countries.

The head of the United Nations mission for Ebola response has begun a visit to take stock of prevention and preparedness efforts in Guinea Bissau, which remains at high risk given its proximity to Guinea where new cases of the virus were reported in an urban area bordering the two countries.

To date, no confirmed cases of Ebola disease has been reported in Guinea-Bissau.

Mr. Graaff is on a two-day official visit to “to take stock of the current Ebola Virus Disease (EVD) prevention and preparedness efforts in the country and see with government how the UN can further mobilize support,” according to a press release from UNMEER.

In addition to meeting with top Guinea-Bissau officials and partners, the UN envoy plans to visit the EVD isolation and treatment site at the Simao Mendes National Hospital in Bissau.

“He will also travel to Contabane border post with Guinea Conakry,” UNMEER said, adding that “the country remains at high risk given its proximity to Guinea, and the recent new cases in the Guinean Prefecture of Boké, bordering Guinea-Bissau.”

According to the World Health Organization’s (WHO) latest update, there were 20 confirmed cases of Ebola virus disease reported in the week to 21 June, compared with 24 cases the previous week.

“Weekly case incidence has stalled at between 20 and 27 cases since the end of May, whilst cases continue to arise from unknown sources of infection, and to be detected only after post-mortem testing of community deaths,” the update said.

Regarding Guinea, it noted that “although cases have been reported from the same four prefectures in Guinea for the past 3 weeks, the area of active transmission within those prefectures has changed, and in several instances has expanded.”

Compared with Guinea, transmission in Sierra Leone has been more geographically confined over the past three weeks, WHO said.

In Guinea-Bissau, UN agencies have joined hands with international and national partners to strongly advocate and support leadership, coordination and action for rapid establishment of the necessary national EVD preparedness and response components.

There have been 27,443 confirmed cases of Ebola in Guinea, Liberia and Sierra Leone with 11,207 reported deaths, according to WHO. The outbreak in Liberia was declared over on 9 May. 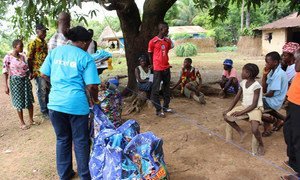 The number of Ebola cases in West Africa has increased for the second straight week, with the number of cases that arose from unknown sources of infection highlighting the challenges still faced in finding and eliminating every chain of transmission, according to the World Health Organization (WHO).