A new report released by a United Nations investigative panel on the possible commission of war crimes in Gaza during the 2014 conflict between Israel and Palestinian armed groups in the enclave, has gathered substantial information finding the allegations to be credible, the Organization’s human rights office announced today.

The report – issued today by the UN Independent Commission of Inquiry on the 2014 Gaza conflict – suggests that possible war crimes were committed by both Palestinian and Israeli armed groups during the 51-day conflict, which resulted in over a thousand deaths and the widespread destruction of the Gaza strip.

“The extent of the devastation and human suffering in Gaza was unprecedented and will impact generations to come,” Justice Mary McGowan Davis, the chair of the commission, told a press briefing held earlier today at the UN Office at Geneva. “There is also ongoing fear in Israel among communities who come under regular threat.”

According to the report’s findings, the 2014 hostilities saw a “huge increase” in the firepower used in Gaza with Israeli forces conducting more than 6,000 airstrikes and firing approximately 50,000 tank and artillery shells at targets within the enclave. The explosion of force used by Israel ultimately resulted in 1,462 Palestinian civilian casualties, a third of which were children.

Moreover, the fighting in Gaza also resulted in the massive destruction of civilian infrastructure with some 100,000 residents still homeless, according to recent UN estimates.

Much of the destruction, notes the UN report, could be blamed on Israel’s use of weaponry with a wide kill and injury radius, particularly in the densely populated areas of Gaza where destruction and casualties are very likely.

At the same time, the Commission reported that Palestinian militants had also fired 4,881 rockets and 1,753 mortars towards Israel in July and August of last year, killing 6 civilians and injuring at least 1,600 people.

As the fighting in Gaza raged throughout the summer of 2014, its impact also reverberated across the region, spreading terror among Israeli civilians and prompting outbursts of deadly violence in the West Bank, as well, where 27 Palestinians were killed and 3,020 injured in clashes with Israeli Security Forces.

In her summation of the report, Justice McGowan Davis observed that when the safety of an Israeli soldier is at stake, “all the rules seem to be disregarded.”

“Israel must break with its lamentable track record in holding wrong doers accountable,” the UN Commission of Inquiry’s assessment continued. “And accountability on the Palestinian side is also woefully inadequate.”

In addition, the UN inquiry said it remained “disturbed” by Israel’s decision to close a criminal investigation into the killing of four children on a beach in Gaza on 16 July. The Commission pointed out that international journalists and numerous Palestinian eyewitnesses were not interviewed by the Israeli authorities, raising further doubts about the thoroughness of their investigation.

“We were deeply moved by the immense suffering and resilience of the victims,” the UN Commission of Inquiry’s assessment concluded. “We just hope our report contributes in some small way to ending the cycle of violence.” 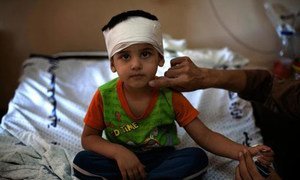 “A moral imperative and a legal obligation,” protecting children should never be jeopardized by national interests, United Nations Secretary-General Ban Ki-moon said today, deploring that 2014 was one of the worst years in recent memory for children in countries affected by conflict.