Voicing concern over “a shrinking democratic space” in Azerbaijan as human rights defenders, journalists and Government critics are increasingly being deprived of their liberty, the United Nations rights office today called on the authorities to galvanize efforts to safeguard the freedoms of expression and association in the country.

“These cases are indicative of a shrinking democratic space in Azerbaijan, where many civil society actors, journalists and lawyers fear reprisals or legal and administrative obstruction in carrying out their important work,” Rupert Colville, spokesperson for the Office of the UN High Commissioner for Human Rights(OHCHR), said today at a press briefing in Geneva.

He added that the closure of some media outlets and the denial of entry to certain journalists and international human rights organizations, especially ahead of the European Games in the capital, Baku, is “one symptom of a wider problem.”

In this regard, he said that High Commissioner for Human Rights Zeid Ra’ad Al Hussein has reached out to the authorities regarding individuals who are reportedly suffering from serious health problems and has sought their release on humanitarian grounds. The official is also seeking the release of the rest who have been deprived of their freedom for exercising their human rights.

“There is an urgent need to relax the legislative and administrative requirements concerning civil society organisations,” stressed Mr. Colville, adding that local and international non-governmental organizations (NGOs) should be allowed to monitor domestic trials on human rights as well as to cooperate with human rights mechanisms without fear of reprisals.

Urging the Government of Azerbaijan to ensure due process and to prevent any interference with defendants’ rights to counsel, OHCHR underscored the independence and accountability of administration of justice and its full respect for the international human rights obligations and commitments.

While applauding progress made on social and economic rights and on working with the displaced people in Azerbaijan, the UN human rights office also called on the authorities to “give the same attention to ensuring respect for the rule of law and to urgently review all cases where people may have been deprived of their liberty for expressing dissenting views or otherwise exercising their fundamental rights.”

Azerbaijan is the host of the first European Games, which began on 12 June in Baku. The Game represents “an opportunity for the countries of Europe to come together and celebrate the Olympic spirit of freedom and inclusiveness.” 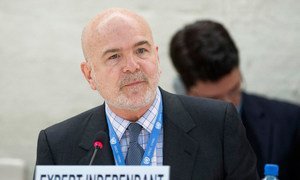 United Nations Special Rapporteur Michel Forst today criticized the “relentless prosecution and repression of prominent rights activists in Azerbaijan” and called for their immediate release – before the inaugural European Games begin in Baku on 12 June.