For Côte d’Ivoire, the October presidential election represents an important milestone in the consolidation of the hard-won gains of recent years, the United Nations envoy for the West African country today told the Security Council today, outlining a very different environment from 2010, but nevertheless advocating for a continued UN presence there.

“Much has been accomplished since the last election, which was marred by terrible violence. Stability is being progressively maintained. The economy is growing, and Ivoirians are able to pursue their affairs in a peaceful environment. While political disagreements remain, there is more and more national consensus for constructive dialogue,” explained Aïchatou Mindaoudou, who heads the UN Operation in Côte d’Ivoire (UNOCI).

Indeed, following the 29 January talks, concrete measures were taken to fund, on an exceptional basis, opposition political parties that do not hold a seat in the National Assembly, she noted.

Dialogue resumed on 26 May, Ms. Mindaoudou continued, bringing together 16 opposition political parties that were focused on crucial issues. UNOCI has also been informed that meetings between the Government and the opposition will be held on a monthly basis. Such advances in political dialogue have contributed significantly to improvements in the overall security and stability of Côte d’Ivoire, she acknowledged.

“However, there are still some political stakeholders who have given in to the temptation to use inflammatory rhetoric, who must continually be encouraged to act responsibly, and in accordance with the law, throughout the electoral period,” observed the Special Representative, who regretted the “political posturing” of some “hardliners.”

But if the Front Populaire Ivoirien (FPI) party and the Parti Démocratique de Côte d’Ivoire (PDCI) are currently experiencing dissidence among their numbers, plural political views and positions are generally being expressed peacefully, according to her.

“In my recent visit of western Côte d’Ivoire, I heard from local stakeholders their genuine commitment to peaceful elections, and the recognition that electoral violence would have negative consequences for the region,” underlined Ms. Mindaoudou.

In preparation for the election, the amended Electoral Code was adopted on 2 April, she reported. Voter registration will go from June 1 to 30 in over 2,000 centres, with the final voters list expected to be ready by 31 August.

June 30 has also been set as the deadline for completing the process of some 64,000 former combatants. “Support will be needed beyond the closure of the programme, as a significant number of them will still be undergoing the reinsertion process, which is expected to last into early 2016.”

Finally, June 30 is also the date of expiration of UNOCI’s mandate, which the Security Council should renew at this “critical juncture” to consolidate Côte d’Ivoire’s achievements since the 2010 post-election crisis, stated Ms. Mindaoudou.

Despite a number of improvements in the security sector, the UNOCI chief indeed expressed concerns at the lack of equipment among Ivoirian law enforcement and security institutions for the maintenance of public order, “which poses a major challenge to their operational capabilities to ensure democratic crowd control.”

Despite the fact that there is an “overall downward trend in criminal activities” since January 2015, armed robberies and banditry continue to pose a challenge for the country, noted the Special Representative.

“Sustaining a peaceful and enabling environment in the lead-up to, during, and after the presidential election will require continued progress,” she added, arguing that “our combined support – the Security Council, Member States, international and regional partners, and the UN system in Côte d’Ivoire – remains essential.” 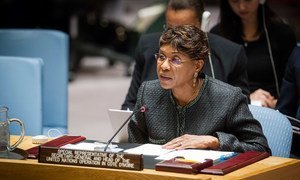 While praising Côte d’Ivoire’s significant progress towards lasting peace and economic recovery, the top United Nations official in the country told the Security Council today that vigilance and determination will still be required to hold onto recent gains and lay the ground for presidential elections next fall.