The United Nations refugee agency (UNHCR) is reporting the arrival of record numbers of refugees on the Greek island of Lesvos, severely straining local reception capacities and the island’s limited resources.

At a press briefing held earlier today in Geneva, UNHCR spokesperson Adrian Edwards warned that sea arrivals in the eastern Aegean islands of Greece have been averaging some 600 people a day with half of the total number coming ashore in Lesvos. He added that the arrivals in Lesvos – the bulk of which originate from countries like Syria, Afghanistan Iraq and Turkey – had shot up from 737 in January to 7,200 in May – nearly a 1,000 per cent spike.

The increasingly heavy influx has caused a particular strain on the island’s reception and processing points which are now beyond capacity, continued Mr. Edwards. A screening centre in the village of Moria, for example, was currently housing over a thousand refugees – more than twice its official capacity of 410 people – while an education park in Kara Tepe was being used as temporary accommodation for another 1,000 refugees.

The spokesperson’s announcement comes just days after UNHCR said it would respond to the critical situation in the Greek islands by increasing its personnel in Lesvos, Chios, Samos, Kos, Rhodes, Leros and Evros.

The UN agency is already helping local authorities to improve reception conditions, identify additional accommodation for refugees, provide legal information and counselling to new arrivals and distribute sleeping bags and mats, soap, sanitary towels and other relief items to the most needy.

However, as regards Lesvos, UNHCR is now calling for an additional urgent reinforcement of personnel and resources as well as a boost in support for the affected island communities in order to effectively deal with the challenges posed by the large number of arrivals, Mr. Edwards added.

More than 90 per cent of the people arriving in the Greek islands are from refugee-producing countries, principally Syria from where over 60 per cent of people came this year, followed by Afghanistan, Iraq, Somalia and Eritrea.

As of the end of May, almost 90,000 refugees and migrants had crossed the Mediterranean in 2015, including some 46,500 who landed in Italy and the 42,000 in Greece. Smaller arrivals numbers have been recorded in Spain at 920 and Malta at 91, according to UNHCR, which also reported that1,850 refugees or migrants have died or are missing at sea. 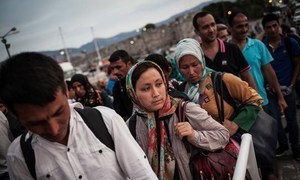 The United Nations refugee agency today announced that it is stepping up its presence in the eastern Aegean islands of Greece where in recent weeks, sea arrivals have been averaging some 600 people a day from countries like Syria, Afghanistan Iraq and Turkey, severely straining local reception capacities.