Secretary-General Ban Ki-moon remains concerned about the potential for escalating violence in Burundi and has reiterated his call for calm and restraint amid the African country’s simmering political tensions.

In a statement issued by his spokesperson, the United Nations chief urged the Burundian authorities “to abide by their international commitments with respect to human rights, including the right to peaceful assembly.”

The situation escalated shortly thereafter, on 13 May, following an attempted coup d’état as President Nkurunziza left for the Summit of the East African Community, which was intended to try to resolve the crisis.

In today’s statement, Mr. Ban called on the country’s authorities to ensure that security forces avoid the use of excessive force in handling demonstrations and stressed that those responsible for ordering or committing human rights violations would be held accountable.

In addition, he noted that the Security Council intended to consider “the various tools at its disposal to safeguard peace in Burundi and ensure accountability.”

Further, the Secretary-General encouraged Burundian stakeholders to “resume in earnest” the consultative political dialogue facilitated by his Special Envoy, Said Djinnit, and hoped that the parties to the dialogue will implement, without delay, the confidence-building measures already agreed.

Mr. Ban also urged the swift implementation of measures “to help create the conditions for the holding of peaceful, inclusive and credible elections in Burundi,” such as the disarmament of all armed youth groups associated with political parties.

The Security Council was briefed today in a closed-door session by Mr. Djinnit as well as the UN Special Advisor for the Prevention of Genocide, Adama Dieng, who visited the country on 30 and 31 May.

In a statement released to the press, the 15-member body reiterated their concern with the violent acts perpetrated in Burundi and the impact of the crisis on the region. “They called on all Burundian stakeholders to demonstrate their sense of responsibility, to exercise restraint, not to resort to violence or retaliatory attacks, to settle disputes peacefully and to prioritize Burundi’s peace and stability above all else and in the best interests of the nation.”

The Council also called on all Burundian parties to reach agreement on a new electoral calendar; reinstatement of private media; protection of civil and human rights; release of detainees; holding accountable those who have used violence; respect of the rule of law; and the urgent disarmament of all armed youth groups allied to political parties.

In addition, it reiterated their intent “to respond to violent acts which threaten peace and security in Burundi.”

The crisis in Burundi has not only led to growing tensions within the country but has also spawned a troubling humanitarian crisis across the region as thousands of Burundian refugees stream across the country’s borders and into neighbouring States such as Rwanda, Tanzania, and the Democratic Republic of the Congo (DRC). Since early April, nearly 100,000 Burundians have fled their country, according to UN estimates. 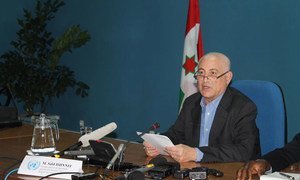 The United Nations is continuing its efforts to facilitate a dialogue among Burundian stakeholders amid the country’s ongoing political deadlock and a burgeoning humanitarian crisis, a spokesperson for the Organization announced today.