“If there is no compromise, Greece may sooner or later default, making the crisis…even worse,” Juan Pablo Bohoslavsky, the UN Independent Expert on foreign debt and human rights, stressed in a press statement today.

The Greek Government has carried out stringent policies since 2010, in which public spending cuts and labour market reforms accelerated unemployment. The latest data show one out of two young adults is jobless. Moreover, 35.7 per cent of the population is at risk of poverty and social exclusion, the highest percentage in the Eurozone.

Healthcare and education are also great concerns, with severe impact on the most vulnerable, said Mr. Bohoslavsky, spotlighting the human rights issues identified in his predecessor’s report on the subject.

While welcoming actions made by Greece such as a debt audit commission and a law on relief for people living in extreme poverty, Mr. Bohoslavsky said these initiatives do not “go far enough,” warning that “economic and social right could be further undermined in Greece by lack of flexibility.”

Greek Government and international lenders should consider a holistic approach to tackle economic and social rights issues, recommended the UN expert, with a priority in maximizing available resources to “bolster the real economy and close holes in the social security.”

Achieving adjustment also needs shared efforts in a fair manner compliant with the obligations Greece and creditor States under related international law, according to Mr. Bohoslavsky.

Of great significance is reforming tax measures and combatting tax evasion at the national level, he highlighted.

“Human rights should not stop at the doors of international organizations and international financial institutions,” said Mr. Bohoslavsky, underscoring that “they have to be respected when responsibilities are delegated by States to international bodies, such as the European Stability Mechanism.” 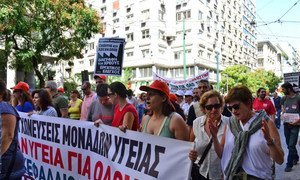 Faced with an “anaemic” pace of job creation and nearly 1.3 million unemployed citizens, Greece risks a prolonged social crisis unless urgent measures are taken, warns a new report out today from the International Labour Organization (ILO).