One in every 10 cigarettes consumed is illicit, making them cheaper and more accessible to people from low-income groups, as well as to children, the World Health Organization (WHO) has warned ahead of this year’s World No Tobacco Day, devoted to combatting the illegal tobacco trade.

“The tobacco epidemic is one of the world’s biggest-ever public health threats, killing nearly six million people annually,” WHO said in a factsheet on tobacco released today. “Unless urgent action is taken, the annual death toll could rise to more than eight million by 2030.”

And nearly 80 per cent of the world's one billion smokers live in low- and middle-income countries, where the burden of tobacco-related illness and death is heaviest, according to WHO.

Each year, World NO Tobacco Day is marked on 31 May by WHO and its partners to highlight the health risks associated with tobacco use and advocate for effective policies to reduce tobacco consumption.

Because the illicit trade of tobacco products poses major health, economic and security concerns worldwide, WHO has said combatting the illegal tobacco trade is the theme of this year’s Day, which falls on Sunday.

“Illicit trade makes tobacco products more affordable and accessible to people from low income groups, as well as children,” according to the WHO report Illegal trade of tobacco products: what you should know to stop it.

“Illicit tobacco products are typically sold at lower prices, thereby increasing consumption. Tax and price policies are widely recognized as among the most effective means of reducing demand for, and consumption of, tobacco products,” it said. “But the illicit trade undermines tax policies, facilitates the uptake of tobacco use by youth and increases health inequalities within the society.”

A key objective of this year’s campaign to advocate for the ratification and implementation by governments of the Protocol to Eliminate the Illicit Trade in Tobacco Products, which is a supplementary treaty to the WHO Framework Convention on Tobacco Control.

The WHO Framework Convention on Tobacco Control entered into force in February 2005. Since then, it has become one of the most widely embraced treaties in the history of the United Nations with 180 Parties covering 90 per cent of the world's population. 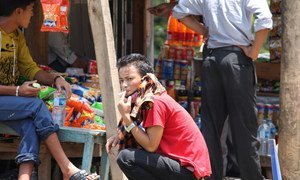 The head of the United Nations health agency today welcomed new data showing that non-smoking is becoming the new norm but urged global action to “push back hard” against the tobacco industry, saying: “We do not have the riches of the tobacco industry, but we are right and we are resolved.”