27 May 2015
The head of the United Nations’ regional commission in Latin America and the Caribbean has met with the Premier of China, and looked forward to greater cooperation and a deeper relationship with the Asian country.

“We at ECLAC have carefully followed the complex process of reforms that China is undergoing to advance towards an inclusive development model characterized by greater environmental sustainability.”

In the last 15 years, trade between ECLAC countries and China expanded by 22 times, with China now the region’s second biggest trading partner, and the largest for both Chile and Brazil. The expansion and deepening of financial and investment relations, particularly in the areas of infrastructure and energy, is likely to bring about important mutual benefits, Ms. Bárcena said.

She called for action to boost overall prosperity, noting that Chinese investment will make a greater contribution to development in the region if it is oriented not only towards the traditional sectors of hydrocarbons and mining, but to manufacturing, services and the development of better infrastructure in transportation, energy and logistics.

“There is also a great deal of room to promote a high-level dialogue and closer positions between China and the region regarding key issues on the global agenda, in particular the post-2015 Development Agenda and the future multilateral regime to combat climate change, as well as the reform of the international monetary system,” she said. “The strategic approximation of China and Latin America and the Caribbean is also part of the necessary strengthening of cooperation among countries from the south.”

In his keynote lecture, the Chinese Premier thanked ECLAC for its contributions to regional thinking and cooperation, stressing the region’s importance to global peace and stability and pointing to several cooperation documents signed in the areas of energy, mining, infrastructure construction, nuclear plants and scientific and technological innovation, valued at more than $30 billion.

“China is prepared to join forces with Latin American and Caribbean countries to contribute in a small but meaningful way to the construction of our happy home and to work together for a more beautiful world,” Mr. Li said, explaining his proposition for a new ‘3x3’ cooperation model, focused on logistics, energy and information technology by improving interaction between business, society and the Government and by broadening three financing channels.

He called for more collaboration between China and ECLAC countries, with the aim of forging a global network of associations for balanced development and of universal benefit, safeguarding in the best way possible both common interests and developing countries’ right to have their say. 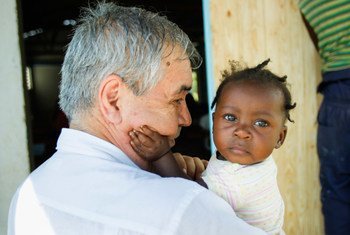 14 May 2015
The cholera outbreak in Haiti remains the largest in recent world history, according to the United Nations official coordinating the Organization’s cholera response in the country, yet the health crisis has fallen off the international agenda after having ceased appearing in the media.