Pause in Syria fighting critical for farmers to harvest crops, get it to those in need – UN

The United Nations World Food Programme (WFP) has called for humanitarian pauses in Syria so farmers can safely harvest and transport crops within the country to reach all Syrians in need.

“With indications that the 2015 harvest in Syria may exceed the last two years’ harvests at a time of massive food insecurity and internal displacement, it is paramount that crops are not lost and that food stays within the country,” said WFP Executive Director Ertharin Cousin in a statement released today.

“We must support unhindered and unrestricted food transport across frontlines; this will ensure food now available in one part of the country reaches Syrians wherever they are in the country,” she added.

“Farmers need peace to harvest and to move their produce to markets. I am urging all sides to allow this to happen,” Ms. Cousin said.

Without a humanitarian pause by all sides, providing unhindered access to Syrian food and opening up corridors for transport, people will still go hungry despite a good harvest, and prices for food will remain high, she warned.

Staffan de Mistura, the UN Special Envoy for Syria who addressed a WFP Executive Board meeting in Rome on Monday, applauded the call.

“I strongly welcome and support the appeal by WFP. The Syrian people have shown incredible resilience and determination in going through this terrible conflict; they should be given a chance to make sure their own crops can reach their own people safely during this critical period,” said Mr. de Mistura.

Some 12.2 million people, including 5.6 million children, need humanitarian assistance throughout Syria. And by conservative estimates, more than 220,000 Syrians have died in the conflict, but that number is likely much higher. 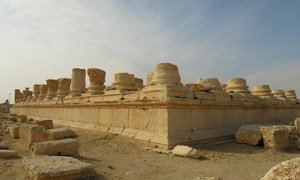 The United Nations refugee agency and its partners are preparing aid for some 11,000 people fleeing the ancient Syrian city of Palmyra and surrounding villages, which have been overrun by militant forces this week.