UN Photo/Evan Schneider
Secretary-General Ban Ki-moon on his visit to the Socialist Republic of Viet Nam.
23 May 2015

In a year of critical efforts against climate change and growing global security challenges, Viet Nam's strong commitment to sustainable development and international peace have made it a “natural” partner of the United Nations, Secretary-General Ban Ki-moon said today.

Completing his trip to Hanoi, the Secretary-General celebrated his final day in the Southeast Asian state by inaugurating the energy efficient and sustainable “Green One UN House,” which he has lauded as “an example of how the UN and Viet Nam can work together to combat climate change and deliver as one for the people of Viet Nam.”

“This magnificent new Green One United Nations House is one more concrete way the United Nations in Viet Nam is leading by example,” Mr. Ban told reporters at a press conference in the Vietnamese capital. “This One UN House is a powerful symbol of how Viet Nam can be a true pioneer for the United Nations. This country is helping to prove how well we can reform how we operate and enhance how we deliver as one around the world.”

Following his meeting with Vietnamese President Trương Tấn Sang yesterday, the Secretary-General also wrapped up his visit to the country by delivering remarks to Viet Nam's Peacekeeping Centre, Diplomatic Academy, and National Assembly in an effort to solidify the bond between Viet Nam and the United Nations, especially in a key year for global efforts against climate change and amid the Organization's post-2015 development agenda roll-out.

“Viet Nam and the United Nations are natural partners,” Mr. Ban declared at the National Assembly. “I am here to strengthen our partnership even more for the future of our world.”

In his remarks, the Secretary-General spotlighted Viet Nam's particular focus on the need for “effective global action on climate change,” as he recalled the country's leadership on the Millennium Development Goals and voiced his hope for its “constructive engagement” at the upcoming Climate Change Conference in Paris in December.

The theme of 2015 as a year for global action on climate and sustainability issues was also a highlight of Mr. Ban's address to the Diplomatic Academy of Viet Nam – a “prestigious” institution providing in-depth training, strategic research and forecasts on a wide range of pressing regional and global issues to Viet Nam's diplomatic corps.

“There can be no peace without development , no development without peace, and sustainable peace and development are not possible without respect for fundamental human rights,” the Secretary-General affirmed as he reminded those gathered that “these three inter-connected pillars” have provided the basis for the UN's response to a host of contemporary challenges.

“We must work together to ensure that climate action addresses the needs of the poorest and most vulnerable while contributing to development that is truly sustainable,” he continued. “Development and peace are two sides of the same coin.”

A slate of upcoming UN conferences this year –on financing for development in July, and on climate change in December, as well as a summit-level meeting in New York this coming September – will seek to tackle the linked challenges of sustainable development and the threat of climate change.

Mr. Ban reiterated, however, that the growing security challenges around the world and in areas of simmering tensions where UN peacekeeping missions are based posed an equal menace to global prosperity.

Speaking at the Viet Nam Peacekeeping Centre, established one year ago, the Secretary-General applauded the Vietnamese contribution to 'blue helmet' operations adding that it stood as “powerful proof of Viet Nam's commitment to our world.”

“All of you are proud representatives of your country on the global stage,” he concluded.

“People struggling with instability will look to you for help and hope. We stand with you as you build on this important start to create a strong record of saving lives, stabilizing communities and creating a more peaceful world.”

The Secretary-General is set to depart Viet Nam today and is scheduled to travel to Ireland tomorrow where he will receive the Tipperary International Peace Award and meet with the country's leadership and a cross section of Irish civil society. 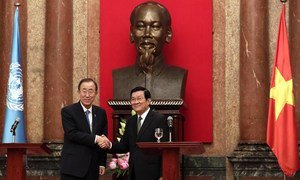 Secretary-General Ban Ki-moon today began a two-day visit to Viet Nam and commended President Trương Tấn Sang for the “increasingly important role” his country is playing at the United Nations, including his efforts to combat climate change and in helping shape a new development agenda.