The United Nations Special Envoy for Syria has said today that consultations on the future of the country continued today, as he shared perspectives with several interested parties, according to a UN spokesperson.

Among those who met with Special Envoy Staffan de Mistura was the Islamic scholar Muhammad Al Habash, who shared his thoughts on methods and processes to facilitate a peaceful solution to the conflict, based on religious perspectives and traditions, according to UN spokesperson Farhan Haq.

Mr. Haq said the Special Envoy also met with Hind Kabawat and Asma Kftarou from a civil society organization called ‘Tastaqil,’ discussing the unacceptable suffering of the Syrian people and the urgent need to end violence and reach a political solution, and he also received a delegation from the Kurdish National Council, with whom he shared views on ways to end the conflict, with due respect for Syrian diversity while maintaining the sovereignty and territorial integrity of Syria.

The Spokesman said that Mr. de Mistura also met with Najla Riachi Assaker, the Permanent Representative of Lebanon to the UN in Geneva. They discussed ways to support Syria in launching a political process, as well as the urgent need to alleviate the humanitarian suffering and its impact on the neighbouring countries.

Mr. de Mistura also received with deep sadness news of the kidnapping of a priest, Father Jacques Mourad, yesterday in Homs, describing the “grave act” as being unfortunately not the first of its kind and “one of the sad consequences” of the raging conflict. 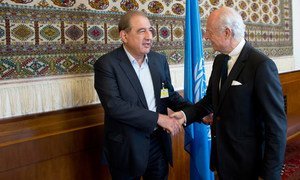 The United Nations Special Envoy for Syria has continued to meet with Syrian, regional and international interlocutors today in the framework of the Geneva Consultations, according to a spokesperson for the Organization.