The United Nations mission in Mali strongly condemned today an attack against a residential compound housing its military personnel in the country capital of Bamako, a spokesperson for the Organization confirmed today.

At a press briefing in New York, UN spokesperson Farhan Haq told reporters that an unidentified armed assailant shot and wounded a local security guard last night during an attempt to set fire to a UN vehicle parked outside the compound. Two grenades were later found on site.

The UN Multidimensional Integrated Stabilization Mission, also known by its French acronym, MINUSMA, stressed that attacks against UN staff and premises is a serious crime and reminded Malian authorities that they remain responsible for the security of UN personnel.

Despite positive developments on the ground, the situation in Mali has remained a challenge. The country’s Government has been seeking to restore stability and rebuild following a series of setbacks since early 2012, including a military coup d'état, renewed fighting between Government forces and Tuareg rebels, and the seizure of its northern territory by radical Islamists.

Throughout much of this time, Mali’s north has remained restive and, in recent months, the UN Multidimensional Integrated Stabilization Mission (MINUSMA) and its “blue helmets” have come under repeated violent attack.

Mr. Haq also noted that MINUSMA remains very concerned by the outbreak of violence across Mali’s north and has intensified its contacts with all parties to restore calm and continue to advance the peace process. 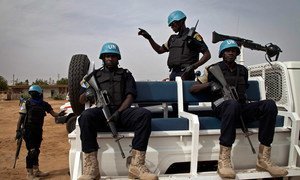 United Nations Secretary-General Ban Ki-moon has welcomed the signature of a peace agreement between the Government of Mali and members of the Plateforme coalition of armed groups in a key step towards bringing stability and security back to the beleaguered country.