UNHCR/S. Alam
Fishing boats such as these, beached on a strip of coast in Teknaf, Bangladesh, are often used to ferry passengers to larger vessels in the Bay of Bengal bound for Thailand or Malaysia.

12 May 2015
Amid continuing reports that thousands of people are stranded on smugglers’ boats in Southeast Asian waters, the United Nations refugee agency today called on governments in the region to ramp up search-and-rescue operations between the Andaman Sea and the Straits of Malacca.

"Through various sources we've been alerted that there could be more such boats in the region that still need to be located and helped,” Adrian Edwards, spokesperson for the Office of the UN High Commissioner for Refugees (UNHCR), told journalists today during the regular briefing at the UN Office in Geneva.

The first priority, he stressed, is humanitarian relief, followed by the identification of those in need of international protection.

While hailing the recent rescue of hundreds of people off the coast of Indonesia, UNHCR encouraged governments in the area to beef up efforts to save lives and keep borders open.

“We are appealing to governments to continue their life-saving operations to find and safely disembark the passengers," said Mr. Edwards.

Several thousand passengers, mainly Rohingya and Bangladeshi nationals, are thought to be adrift at sea after smugglers abandoned them to avoid crackdowns in Thailand and Malaysia, according to UNHCR’s partner the Arakan Project.

In addition, the UN refugee agency noted that many of the passengers are in a weakened state after days, possibly weeks with little food and water.

“UNHCR urges against indefinite detention of those rescued, who should be given access to basic rights and services including family unification, shelter, healthcare and where possible, the right to work while longer-term solutions are sought,” Mr. Edwards underscored.

Meanwhile, the UN agency has been on the ground talking to survivors in support of government efforts.

For example, in Thailand, UNHCR teams are distributing aid and providing counselling to over 230 smuggling victims, who have surrendered themselves to the police recently after escaping or being abandoned in smugglers’ camps.

In Indonesia, UNHCR has sent a team to Lhoksukon in northern Aceh to assist the Government in interviewing groups rescued by the Indonesian navy over the weekend and protect them.

According to Mr. Edwards, UNHCR staff is currently in Langkawi, Malaysia to meet with the authorities and local contacts.

1,093 people, mostly Rohingya, arrived by boat in Langkawi on Sunday night. They are in fair condition and have been seen by doctors, given their ordeal.

“We are aware of the challenges of managing such a humanitarian emergency, and we have offered our assistance to the government,” said Mr. Edwards, adding that “we stand ready to participate with the authorities in providing humanitarian assistance.” 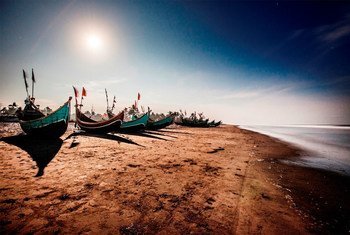 8 May 2015
The number of irregular migrants crossing the Bay of Bengal has almost doubled over the past year amid a dangerous uptick in human smuggling and trafficking across the region, according to a new report from the United Nations refugee agency.