The Government of Paraguay has failed in its responsibility to protect a 10-year old sexual abuse survivor and provide her with critical and timely treatments, including a “safe and therapeutic” abortion, a group of United Nations experts said today.

The girl’s pregnancy – which came to light in national and international media several weeks ago – was the result of repeated sexual abuse allegedly perpetrated by her stepfather. Yet Paraguay’s reportedly “restrictive” abortion laws only permit the termination of a pregnancy when the life of a woman or girl is at “serious risk.”

“The Paraguayan authorities’ decision results in grave violations of the rights to life, to health, and to physical and mental integrity of the girl as well as her right to education, jeopardising her economic and social opportunities,” warned the four experts composing the UN Working Group on the issue of discrimination against women in law and in practice.

“Despite requests made by the girl’s mother and medical experts to terminate this pregnancy which puts the girl’s life at risk, the State failed to take measures to protect the health as well as the physical and mental integrity and even the life of the 10-year old girl,” they continued. “No proper interdisciplinary and independent expert assessment with the aim to insure the girl’s best interests was done before overturning life-saving treatments, including abortion.”

According to the World Health Organization (WHO), child pregnancies are extremely dangerous for the health of pregnant girls as they can lead to complications and death in some cases, especially as girls’ bodies are “not fully developed to carry a pregnancy,” the experts added.

In Latin America, in particular, the UN reports that the risk of maternal death is four times higher among adolescents under 16 years old with 65 per cent of cases of obstetric fistula occurring in the pregnancies of adolescents. In addition, early pregnancies are also dangerous for the babies with a mortality rate 50 per cent higher.

Against that backdrop, the UN experts welcomed last Friday’s decision by Paraguayan authorities to establish a multidisciplinary panel of experts to express itself on the terms of the overall health of the girl and to give an opinion on the risks and recommendations to ensure her health.”

Nevertheless, they noted that girl’s mother had reported the ongoing sexual abuse against her daughter in 2014 and deplored the authorities’ “unresponsiveness to take action.” Moreover, they said they “deeply regret” that the State had “failed in its responsibility to act with due diligence and protect the child.”

The UN Working Group on the issue of discrimination against women in law and in practice is composed of five independent experts from all regions of the world: Emna Aouij of Tunisia, Rashida Manjoo of South Africa, Juan Mendez of Argentina; and Dainius Puras of Lithuania.

♦ Receive daily updates directly in your inbox - Subscribe here to a topic.
♦ Download the UN News app for your iOS or Android devices.
sexual rights 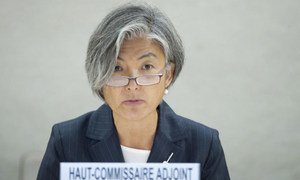 Paraguay: UN calls for reforms to protect rights of women and indigenous

New laws are urgently needed in Paraguay to protect the rights of minorities, in particular women and indigenous people, a top United Nations human rights official has said, calling on the Government to scale up its efforts to stop discrimination and injustice towards these groups.