Two United Nations human rights experts have condemned the sharp increase in executions across Iran in recent weeks, urging the Government in Tehran to heed the Organization's appeal for an immediate halt on the use of the death penalty.

“When the Iranian government refuses to even acknowledge the full extent of executions which have occurred, it shows a callous disregard for both human dignity and international human rights law,” Ahmed Shaheed, the Special Rapporteur on the situation of human rights in Iran, stressed in a press release issued earlier today.

According to a UN human rights report released last year, the new Islamic Penal Code that entered into force in 2013 now omits references to apostasy, witchcraft and heresy, but continues to allow for juvenile executions and retains the death penalty for activities that do not constitute most serious crimes in line with the safeguards guaranteeing protection of the rights of those facing the death penalty such as adultery, repeated alcohol use, and drug possession and trafficking.

Iran has witnessed a surge in executions over the past two years.

At least 852 individuals were executed between July 2013 and June 2014 – the last reporting period for which data is available – representing an “alarming” increase in the number of executions in relation to the already-high rates of previous years, according to UN estimates.

In addition, more than 340 persons, including at least six political prisoners and seven women, were reportedly executed since January 2015.

“We are alarmed by the recent surge in the number of executions, which has occurred despite serious questions about fair trial standards,” added Christof Heyns, the UN Special Rapporteur on extrajudicial executions. “Many of the prisoners executed during this period were charged with drug-related offences, which do not involve intentional killing and hence do not meet the threshold of the 'most serious crimes'.”

Both experts drew particular attention to continued reports of public executions, noting that 15 such executions were known to have already occurred in 2015. Public executions, they said, had “a dehumanising effect on both the victim and those who witness the execution” and ultimately reinforced the “already cruel, inhuman and degrading nature of the death penalty.”

Mr. Shaheed and Mr. Heyns urged the Iranian Government to establish an immediate moratorium on the death penalty throughout Iran with a view to abolishing the practice altogether. 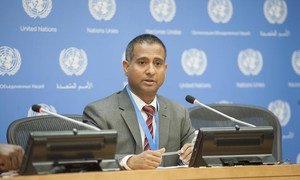