UN Photo/Mark Garten
Children performing a violin composition during a special ceremony to commemorate the return of the Peace Bell to its original location in the Japanese Garden, at UN headquarters.
6 May 2015

As one of the oldest outdoor gifts at the United Nations, the Peace Bell represents the “collective desire for the world to live in peace,” Secretary-General Ban Ki-moon said today at a ceremony to reinstall the symbolic bell at its permanent home at Headquarters in New York.

“I always take great inspiration whenever I pass by, and of course when we ring it each September to mark the International Day of Peace,” Mr. Ban said.

“As I remember, there was only one year we were not able to hit this Peace Bell – that was 2001 on September 11th. We were ready to have this Peace Bell ceremony on the day of the opening of the General Assembly. On that day the September 11th terrorist attacks happened, so we had to evacuate this building,” Mr. Ban recalled.

Unlike many other gifts, the Peace Bell came to the United Nations courtesy of a non-governmental organization, the UN Association of Japan, even before Japan became a UN Member State. It was a sign of support of the goals and ideals of the Organization.

The idea for a “bell of peace,” as it was originally known, was proposed by Mr. Chiyoji Nakagawa, a representative of the UN Association of Japan who attended the General Assembly's sixth session, in 1951.

“After surviving the cruelties and deprivations of the Second World War, Mr. Nakagawa wanted to create a symbol for humanity's hopes for global peace,” Mr. Ban said.

For five years, as the United Nations renovated its Headquarters complex along Manhattan's East River, the Peace Bell found a temporary home in the Rose Garden. It is currently placed at the intersection of the General Assembly, Secretariat, and Conference buildings.

“Over the last five years that the Peace Bell was away, too many innocent people around the world have heard only the sounds of guns and bombs,” Mr. Ban said.

“Now that it is restored back to its home, let us also intensify our work to restore the bells of peace in villages and cities and countries around the world,” he added.

Also speaking at today's ceremony was President of the General Assembly Sam Kutesa who called the Peace Bell both unique and emblematic, having been cast using coins collected by the United Nations Association of Japan from children of all existing UN Member States in 1952.

“Today, as we return this prominent icon of peace to its permanent location, let us recall the Declaration on the Rights of Peoples to Peace, adopted thirty years ago by the General Assembly,” Mr. Kutesa said.

The Declaration reaffirmed that the aspiration for peace is universal among all peoples and that every human being has the right to live in a peaceful environment.

“Each time we ring this bell in the future, we should recall our commitment towards the peaceful resolution of conflicts and the building of lasting peace,” he added.

Yesterday the Secretary-General and General Assembly President planted the 'Tree of Unity and Peace' at Headquarters marking the end of the Second World War. Later that morning, General Assembly held a solemn ceremony remembering all the men, women and children who lost their lives during the war.

♦ Receive daily updates directly in your inbox - Subscribe here to a topic.
♦ Download the UN News app for your iOS or Android devices.
ceremony 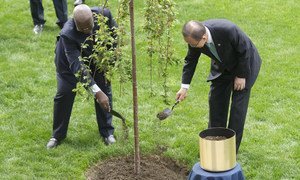 Seventy years ago, in 1945, from the ashes of one of humanity's darkest moments, the United Nations was founded to lead the world "out of horror and into peace," declared Secretary-General Ban Ki-moon today at a tree planting and ceremony to remember the countless victims who lost their lives in the Second World War.