UNHCR/N. Wright
At a social centre for refugees on Nauru, where they are held, conditions are basic.
6 May 2015

A group of United Nations human rights experts today called on Nauru to set up an independent monitoring body to ensure that the country meets its obligations to treat people in detention correctly.

During a three-day visit to Nauru, members of the UN Subcommittee on the Prevention of Torture (SPT) visited Nauru’s police station and prison, as well as the Regional Processing Center (RPC) for asylum-seekers, a large facility comprising three separate units housing men, women and families with children who have been attempting to reach Australia.

“We were pleased to be able to visit all places of deprivation of liberty on the island,” said Malcolm Evans, the chair of the SPT and head of the three-member delegation, which also included experts, June Lopez and Nora Sveaass.

The SPT monitors how States that have ratified the Optional Protocol to the Convention against Torture (OPCAT) are meeting their treaty obligations, which include setting up a monitoring body known as a National Preventive Mechanism (NPM). Nauru became a party to OPCAT in January 2013 and an NPM should have been in place one year after that.

“Given the number of people currently being held on the island, the establishment of an NPM to address their needs and their situation becomes even more pressing,” said Mr. Evans, who indicated that the delegation was encouraged to receive assurances from the Government of Nauru that such a mechanism would be established as soon as possible.

“The SPT would be pleased to respond to any request by the Government of the Republic of Nauru for assistance,” said Mr. Evans. “It is, of course, essential that this mechanism is able to operate effectively and independently in all facilities on the island.”

♦ Receive daily updates directly in your inbox - Subscribe here to a topic.
♦ Download the UN News app for your iOS or Android devices.
nauru|migrants 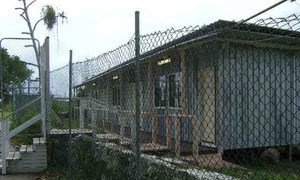 The United Nations Children’s Fund (UNICEF) raised concerns today regarding reported decisions by the Governments of Australia and Cambodia to start transferring refugees currently in an Australian-funded processing centre in Nauru to Cambodia for settlement.