The United Nations Security Council today expressed its deep concern at the outbreak of violence that has occurred in Mali this past week, which “threatens to undermine the peace process, and demanded that the hostilities cease immediately.”

In a statement to the press, the 15-member Council urged the parties to demonstrate their commitment to the peace process and adhere to their obligations under the cease fire agreement of 23 May 2014, and the declarations of cessation of hostilities of 24 July 2014 and 19 February 2015.

Council members also stressed that the attacks perpetrated since 27 April 2015, notably in the northern Malian cities of Ménaka, Goundam and Léré, violate the ceasefire. They recalled the statement by the Council’s President released on 6 February 2015 and another one on 10 April 2015, expressing the Council’s readiness to consider targeted sanctions against those who resume hostilities and violate the ceasefire.

“In this regard, the members of the Security Council expressed their intention to evaluate next steps in light of these violations and events on the ground,” the statement said.

They also reiterated full support to Special Representative of the Secretary-General for Mali, Mr. Mongi Hamdi, and to the United Nations Multidimensional Integrated Stabilization Mission in Mali (MINUSMA), to engage with all parties to de-escalate tensions and continue dialogue.

They urged the parties, including the armed groups of the Coordination, to remain committed to the peace process in which they engaged.

Members also encouraged parties to continue to engage constructively with sustained political will and in good faith, supported by the members of the international mediation team, with the view to sign the draft Agreement on Peace and Reconciliation in Mali on 15 May 2015 in Bamako.

“The Security Council expressed its full support to the members of the international mediation team for their efforts to support the parties in this regard,” the statement concluded.

In recent years, Mali has been confronted by a crisis with serious political, security, socio-economic, humanitarian and human rights consequences. The crisis stems from long-standing structural conditions such as weak State institutions, ineffective governance, deep-seated feelings among communities in the north of being marginalized and the effects of environmental degradation, climate change and economic shocks. 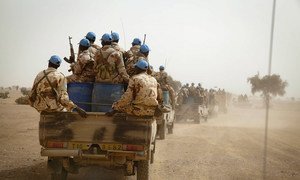 United Nations Secretary-General Ban Ki-moon today called for an immediate end to hostilities in northern Mali and expressed concern over ceasefire violations that have occurred in the country in recent days at a “critical moment” in the peace process to bring all parties to sign the draft peace agreement.