US Government
Atmospheric nuclear test conducted by the United States on 18 April 1953 at the Nevada Test Site.
28 April 2015

Achieving a world free of nuclear weapons is “one of the most crucial debates of our time,” United Nations Secretary-General Ban Ki-moon said today, emphasizing that the international tide of nuclear abolition – so strong in 2010 – has ebbed and mounting tensions between nuclear-armed States have produced a return to Cold War mind sets.

“Nuclear weapons are again becoming embedded in national defence strategies. Support has deepened for misguided doctrines of deterrence,” Mr. Ban said in a message delivered by UN High Representative for Disarmament Affairs Angela Kane to the Symposium and High-Level Panel on the Non-Proliferation Treaty, Nuclear Disarmament, Non-Proliferation and Energy; Fresh Ideas for the Future.

“Modernization programmes envisage retention of these deadly weapons for decades to come. Nuclear weapon States have not demonstrated the leadership required to break the status quo, instead attaching hollow conditions to their disarmament obligations,” Mr. Ban added in the message.

The Symposium, a side event held in connection with the 2015 Review Conference of the Parties to the Treaty on the Non-Proliferation of Nuclear Weapons (NPT), which opened yesterday at UN Headquarters, was also expected to hear from UN Messenger of Peace, Michael Douglas.

“This Review Conference offers an opportunity to change the narrative; to remind all States parties that their collective good is best served by the full implementation of – and compliance with – all of the Treaty’s goals; and to put us back on course,” Mr. Ban said, calling on participants to provide ideas that will “propel us down the path to a world free of nuclear weapons.”

For over four decades, the Treaty has been a bulwark against the spread of the most dangerous and inhumane weapons ever devised, and it has been a central and essential mechanism for their elimination. Calling it “indispensable,” Mr. Ban said the Treaty has strengthened the security of all States parties, serving as a foundation for international security. Over the course of its history, the NPT has also helped cope with multiple challenges and competing positions.

While the ultimate goal of the NPT – to prevent the spread of nuclear weapons and to bring about their elimination – has not changed, the international security climate has evolved and continued to do so, with new problems constantly “testing our resolve,” Mr. Ban said.

To be effectively implemented, the Treaty requires constant tending to ensure that it remains strong and capable of safeguarding against the existential threat posed by nuclear weapons.

“We need new ideas to shore up the NPT, to confront new obstacles head on, and to overcome them,” he said. “Proliferation challenges persist. The Democratic People’s Republic of Korea continues with its dangerous and destabilizing activities, flouting international law and the will of the international community.”

At the same time, despite valiant efforts, the conference on a Middle East zone free of nuclear weapons and all other weapons of mass destruction has not yet taken place, Mr. Ban noted. The benefits of such a zone are manifold, including regional peace and stability.

“We have seen the sheer emergence of a movement seeking to address the humanitarian consequences of nuclear weapons. This has re-energized a frozen debate, reminding us that the indiscriminate and catastrophic costs of nuclear weapons are, at their core, human costs,” he added.

The 2015 Review Conference will run at UN Headquarters in New York through 22 May. The President-designate of the Conference is Ambassador Taous Feroukhi from Algeria.

The NPT is a landmark international treaty whose objective is to prevent the spread of nuclear weapons and weapons technology, to promote cooperation in the peaceful uses of nuclear energy and to further the goal of achieving nuclear disarmament and general and complete disarmament. It represents the only binding commitment in a multilateral treaty to the goal of disarmament by the nuclear-weapon States. 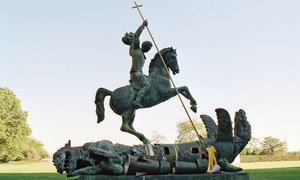 Progress in working towards global nuclear non-proliferation has stalled and the trend towards “nuclear zero” is reversing, United Nations Secretary-General Ban Ki-moon warned today as he called on Member States to urgently ramp up efforts in tackling nuclear disarmament.