United Nations Secretary-General Ban Ki-moon has today condemned the outbreak of violence in Burundi following the nomination of President Pierre Nkurunziza as the presidential candidate of the country’s ruling party, and appealed to all Burundians to “safeguard the hard won gains” made in peace and democracy.

“[Mr. Ban] calls on the Burundian authorities to conduct a prompt investigation into the deaths that occurred during the recent demonstrations so that those responsible are held accountable,” said a statement released from the Secretary-General’s spokesperson this morning.

According to the statement, the UN chief has dispatched his Special Envoy for the Great Lakes Region, Said Djinnit to Burundi for consultations with President Nkurunziza and other Government authorities, political party leaders and members of the diplomatic community.

“He calls on the Burundian authorities to uphold the human rights of all Burundians, including the freedom of assembly, association and expression,” the statement said.

Meanwhile, Mr. Ban also called on the security services to remain impartial and exercise restraint in responding to public demonstrations and urged all parties to reject violence and avoid using inflammatory language or hate speech that could further increase tensions. He urged Burundians to resolve their differences through dialogue.

“[Mr. Ban] reiterates the commitment of the United Nations to support peaceful, credible and inclusive elections,” the statement added.

President Nkurunziza has been in office for two terms since 2005, and a broad array of actors has warned that an attempt to seek a third term is unconstitutional and contrary to the spirit that ended a decade of civil war in the country.

In related news, a spokesperson for the Office of the UN High Commissioner for Refugees (UNHCR), Ariane Rummery told reporters in Geneva that the number of Burundian refugees crossing into Rwanda had jumped significantly, with over 5,000 refugees entering the country in just two days. According to the Government of Rwanda, since the beginning of April, nearly 21,000 Burundians, mostly women and children had fled to Rwanda saying that they had experienced intimidation and threats of violence linked to the upcoming elections.

The previous week, the official list of candidates to run in the Burundian Presidential elections on 26 June had been announced, which had sparked demonstrations and violence in the nation’s capital, she explained.

The Government of Rwanda had allocated land in Mahama, in the Eastern Province to open a new refugee camp. UNHCR and its partners were working moving refugees to the new Mahama refugee camp in daily convoys of up to 1,500 people. Ms. Rummery said that due to the sharp increase of new arrivals, the conditions in the two reception centres, Bugesera and Nyanza, had become more and more congested and UNHCR is expecting to relocate all refugees by 1 May.

Since conducting a rapid assessment mission of the new site in Mahama sector, UNHCR had immediately mobilized its teams and partners to erect over 450 family tents to accommodate over 4,000 people, 7 hangars, 80 latrines, 80 showers, a health post and security post, she added. 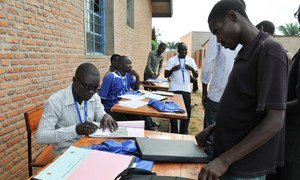 Civil unrest erupted in Burundi this weekend after the ruling party overwhelmingly elected President Pierre Nkurunziza on Saturday as its candidate for the 26 June presidential election, the humanitarian wing of the United Nations reported today, appealing for $11.6 million dollars to plan a response for the influx of people seeking refuge in neighbouring countries.