UNRWA
Residents of the Yarmouk Refugee Camp in Syria where the humanitarian situation is grave.
20 April 2015

The United Nations Security Council has today expressed deep concern about the grave humanitarian situation in Yarmouk refugee camp, located on the outskirts of the Syrian capital, Damascus.

In a press statement issued after being briefed by Pierre Krähenbühl, Commissioner General of the UN Relief and Works Agency for Palestine Refugees in the Near East (UNRWA), Council members welcomed recent efforts by UNRWA and Secretary-General’s Deputy Special Envoy, Ramzy Ramzy, and called for unhindered humanitarian access to Yarmouk and for the protection of civilians inside the camp.

They stressed the need to support the emergency relief effort for civilians in Yarmouk including through funding the $30 million emergency appeal and to provide diplomatic and political support for the agency.

Supporting UN efforts to assist trapped Palestinian refugees in Yarmouk, the Council highlighted a three-point plan including assistance for civilians in the camp, assisting those wanting to ‘temporarily relocate’ from the camp in accordance with international humanitarian law, and assisting residents who have already fled.

The Council called for support of the UN framework in line with legal obligations, and condemned all acts of terrorism, demanding that Islamic State of Iraq and the Levant (ISIL) and Al-Nusra Front withdraw from Yarmouk immediately.

Mr. Krähenbühl, who briefed the Council from Jerusalem via video link, spoke to journalists at UN Headquarters afterwards, updating them on the briefing and on recent happenings in Yarmouk.

Having recently returned from a four-day humanitarian mission to Damascus, he said that he told the Council about the situation inside Yarmouk and his concerns about the security, safety and levels of protection of civilians in the camp.

While he acknowledged that the humanitarian situation remains “very extreme” in terms of the circumstances and hardships faced, he pointed to “concrete achievements” coming from discussions with the Government about possibly widening the scope of humanitarian access.

Many people had described the terrible impact of the situation they faced in the last two years, he said. Several thousand people remain in Yarmouk and he said he was determined to establish distribution points to allow them to access humanitarian aid, and to enhance distribution of assistance to those who had managed to escape to nearby neighbourhoods.

Describing some of the assistance that UNRWA was distributing, he underscored the need for ongoing financial assistance. A total of $30 million was needed for immediate emergency aid in addition to over $400 million requested for the overall Syria Appeal, which had received only 19 per cent funding.

Mr. Krähenbühl stressed that the Council should remain seized of the matter and said a visit by members to Syria would be a strong signal of the importance that it attaches to the situation. 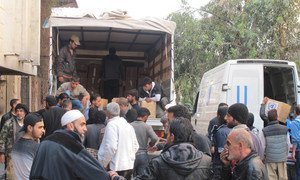