UN Photo/Victoria Hazou
At the Womens Prison in Pétionville, a suburb of Port-au-Prince, Haiti, twenty to thirty detainees are crowded into each prison cell and women and girls, some as young as 14, often sleep on the floor in shifts. (File, 2012)
16 April 2015

With over 10 million people in prisons worldwide, prison overcrowding has reached epidemic proportions in many countries, a senior official from the United Nations Office on Drugs and Crime (UNODC) said today at the 13th UN Congress on Crime Prevention and Criminal Justice.

“Prison overcrowding can also be considered as a symptom of a malfunctioning justice system, and the problems of overcrowding have to be dealt with by the prison administration, although the solutions are seldom within their reach,” Piera Barzano, Senior Regional Advisor of the Justice Section at UNODC, said during a side event at the UN Crime Congresscurrently under way in Doha.

There are usually several reinforcing reasons that may lead to prison overcrowding, she continued, and such causes are not confined to the limits of criminal justice but extend to other spheres of State responsibility such as welfare policy, access to health services, education, and employment.

Running until the 19 April, the Crime Congress, held every five years, brings together governments, policy-makers and experts to consider how best to integrate crime prevention and criminal justice into the wider UN agenda. It also focuses on links between security and justice, and sustainable development.

Last year, 77 countries worldwide were reported having a prisoner occupancy rate higher than 120 per cent, with some as high as almost 400 per cent. The problem is very localized and extremely challenging, according to UNODC. Overcrowding also increases the risk of transmission of communicable diseases and poses an immense management challenge to prison administrations.

Five years ago at the 12th UN Crime Congress, in Brazil, a workshop was held on the ‘Strategies and Best Practices against Overcrowding in Correctional Facilities.’

“So here we are five years down the line,” continued Ms. Barzano, but there is still a growing recognition that one of the key obstacles to implementing the provisions of the standard minimum rules of the treatment of prisoners is overcrowding in prisons,

She also highlighted UNODC’s work with the Red Cross to publish a handbook on strategies to reduce overcrowding in prison. Calling it a practical tool for practitioners and policy-makers, she said the handbook is available on UNODC’s website in several languages.

“Overcrowding is a very serious humanitarian concern as it generates substandard and inhumane conditions. Tens of thousands of people are forced to live in congested accommodations with insufficient space to move, sit or sleep,” said Miroslawa Czerna of the International Committee of the Red Cross (ICRC), who was also at the event.

“Being squeezed into cramped living quarters in appalling hygiene conditions and with no privacy makes the experience of being deprived of freedom distressful in normal circumstances exponentially worse. It erodes human dignity,” she added.

♦ Receive daily updates directly in your inbox - Subscribe here to a topic.
♦ Download the UN News app for your iOS or Android devices.
prison 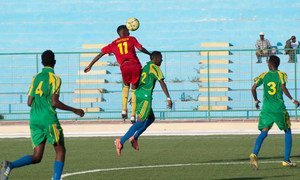 The United Nations Office on Drugs and Crime (UNODC) announced today a new partnership with the International Centre for Sport Security (ICSS) to help strengthen cross-border investigations into match-fixing and manipulation of sports competitions, as well as bolstering measures to prosecute offenders.