Civil society actors have a critical role to play in the outlining of a successful post-2015 sustainable development agenda, President of the United Nations General Assembly Sam Kutesa declared today.

In a statement made to the Assembly’s Informal Interactive Hearing ahead of the Third International Conference on Financing for Development, Nicholas Emiliou, Acting President of the General Assembly, explained that the formulation and successful implementation of “an inclusive and transformative” agenda would depend on the key “mobilization of financial resources” from both the private and public sectors.

“It is evident that in order to achieve our goals, we need to harness vast resources, skills, knowledge and innovative ideas from all segments of society,” Mr. Emiliou said in a statement made on behalf of Mr. Kutesa. “Civil society has an important role and it should play its part in this endeavour.”

Pointing to the upcoming Third International Conference on Financing for Development to be held in Addis Ababa later this year, the Acting President also noted that civil society actors had already been engaged in the conference’s preparatory process but, he added, today’s meeting provided yet “another unique opportunity” for them to “give their input and views” on Addis’ planned outcome document.

“It is essential that we work towards concrete deliverables and a new global partnership for sustainable development that will support the implementation of the new universal development agenda,” Mr. Emiliou continued.

“Let us continue working together for a comprehensive financing framework for sustainable development in order to deliver on the aspirations of our countries, people, and communities worldwide.” 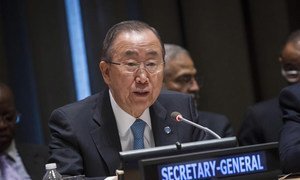 The international community needs a financial framework capable of confronting the multifaceted crises of the day in a predictable and effective manner if it is to delineate a successful post-2015 sustainable development agenda, United Nations Secretary-General Ban Ki-moon confirmed.