Reflecting on Rwanda, Ban urges courage ‘to counter the cruelty taking place before our eyes’

UNDP Rwanda
The UN family in Rwanda commemorates the 21st anniversary of the genocide.
7 April 2015

The world must make use of the International Day of Reflection on the Genocide in Rwanda to look back on the past – and to squarely confront the challenges of the present, renewing the collective resolve and summoning the courage to prevent such atrocities from happening again, United Nations Secretary-General Ban Ki-moon said today.

“Our annual sombre observance is all the more meaningful this year as we mark the 70th anniversary of the founding of the United Nations, said Mr. Ban in his message on the Day, which honours the memory of the more than 800,000 people – overwhelmingly Tutsi, and also moderate Hutu, Twa and others – systematically killed across Rwanda in less than three months just over two decades ago. It is also an occasion to recognize the pain and the courage of those who survived.

In his message, Mr. Ban stressed that many countries today face grave security threats, with people being subjected to the brutality of violent conflicts and the indignities of poverty. Discrimination persists in societies torn apart by war, as well as in democracies that largely enjoy peace. Hatred may manifest as institutionalized racism, ethnic strife, or episodes of intolerance or exclusion. In other instances, discrimination reflects the official, national version of history that denies the identity of some segments of the population.

“I deplore the conflicts and atrocity crimes in many parts of the world that continue to divide communities, killing and displacing people, undermining economies and destroying cultural heritage,” declared the Secretary-General, emphasizing that the international community’s first duty is always to prevent these situations and to protect vulnerable human beings in distress. 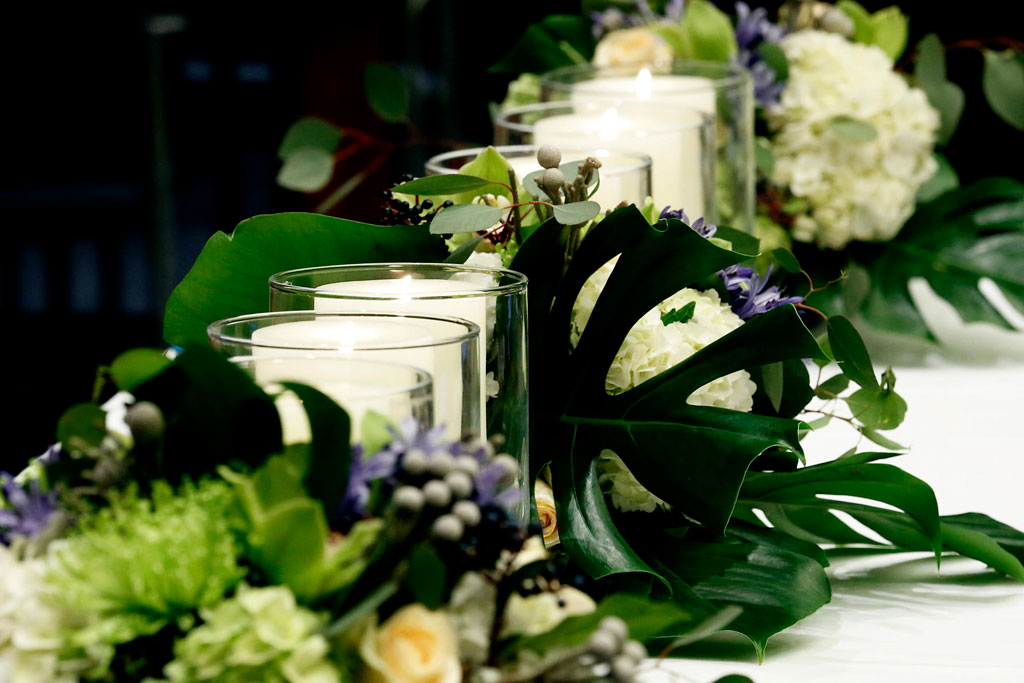 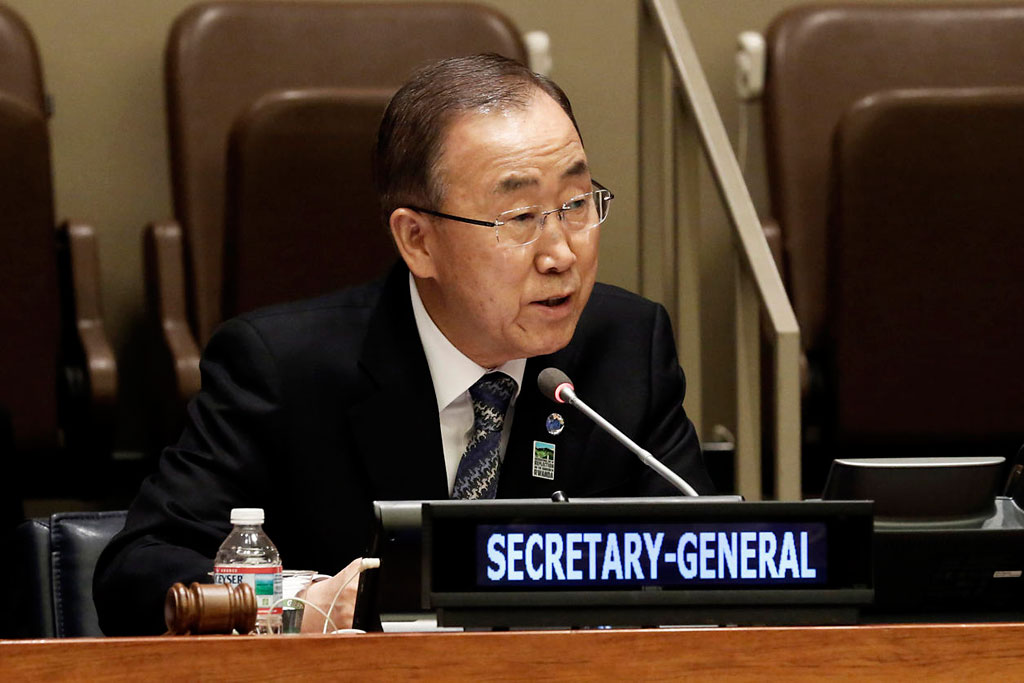 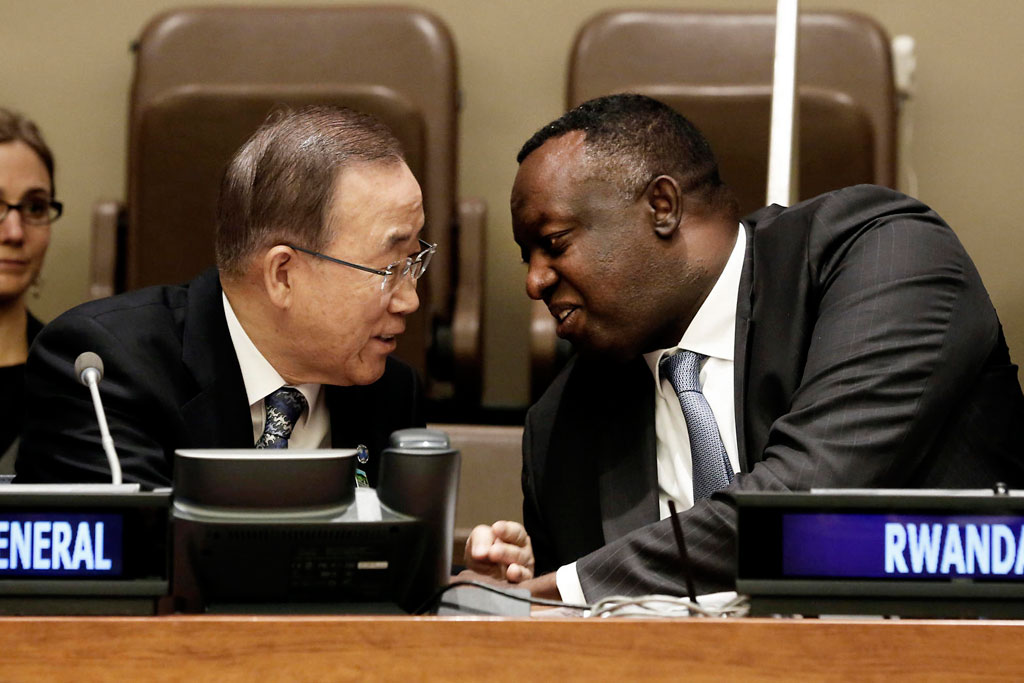 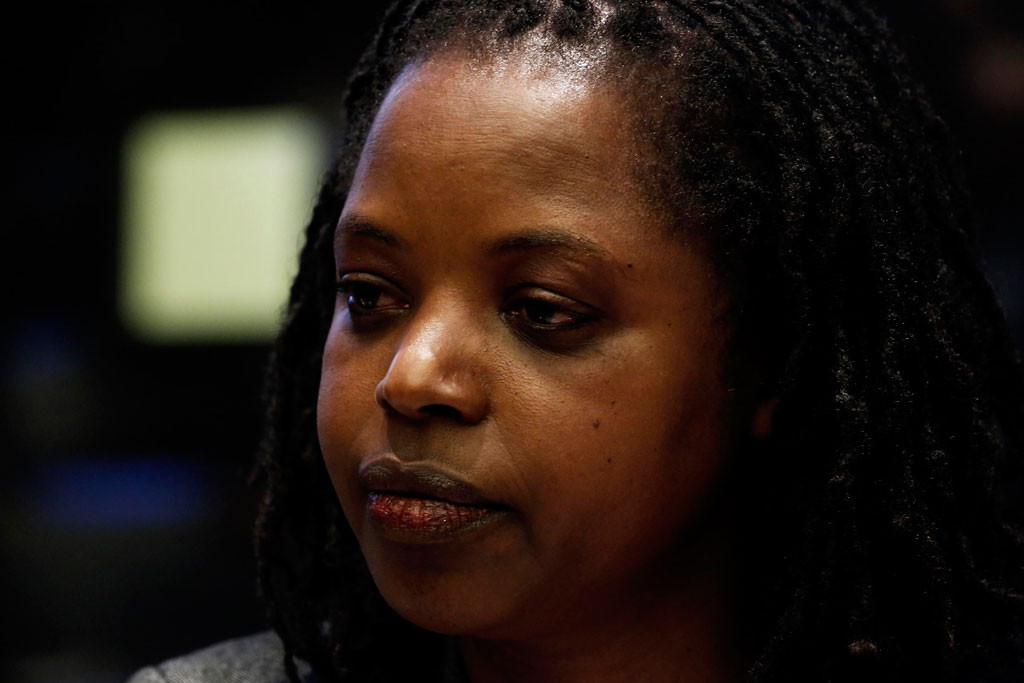 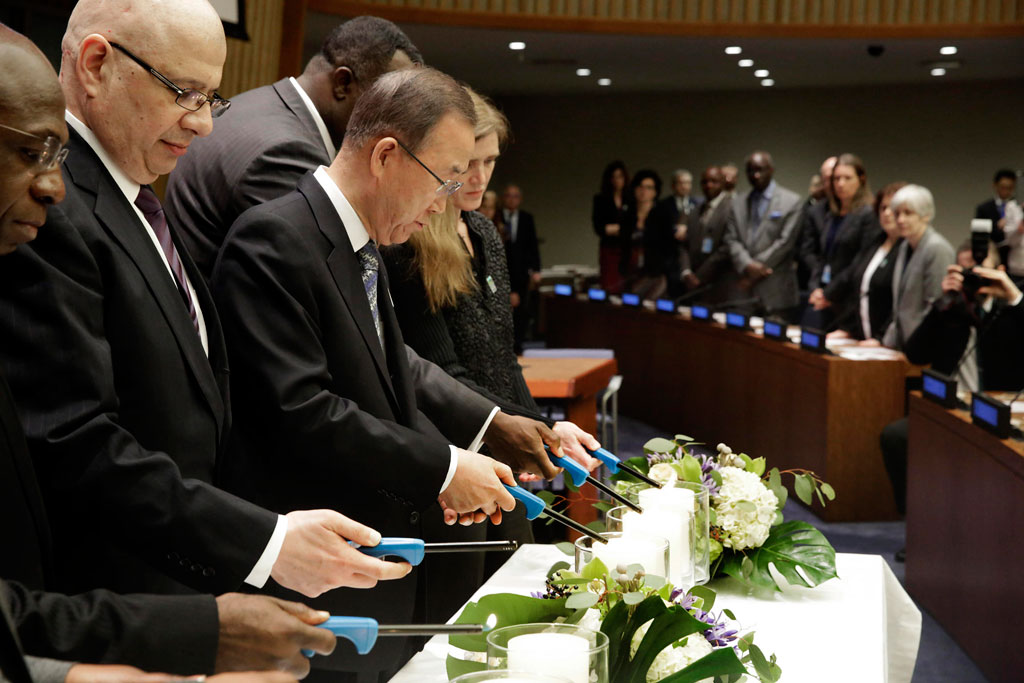 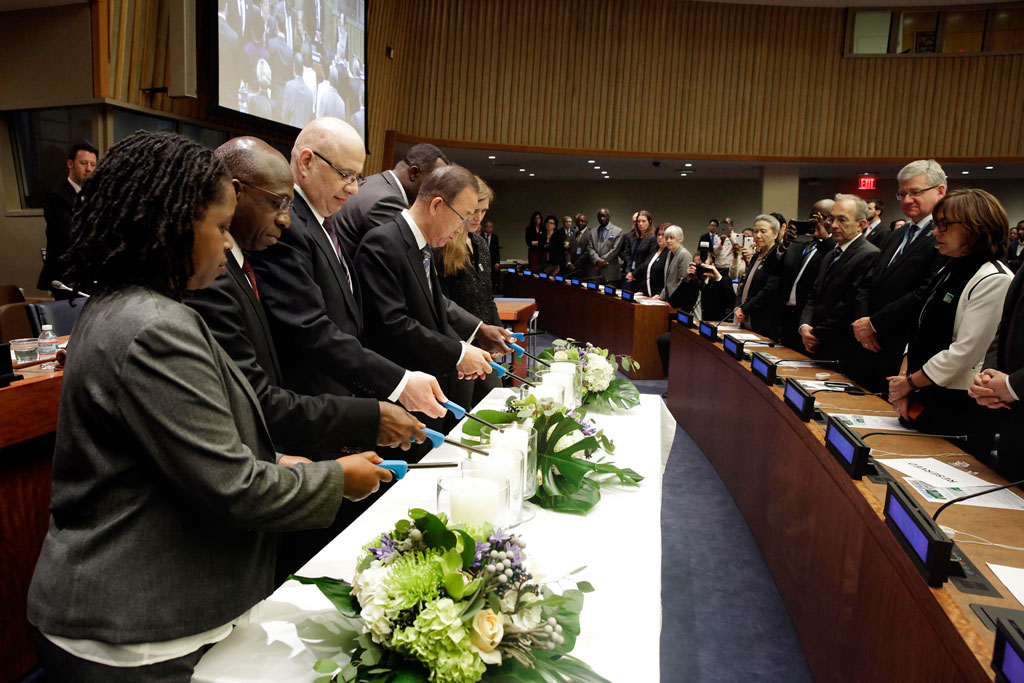 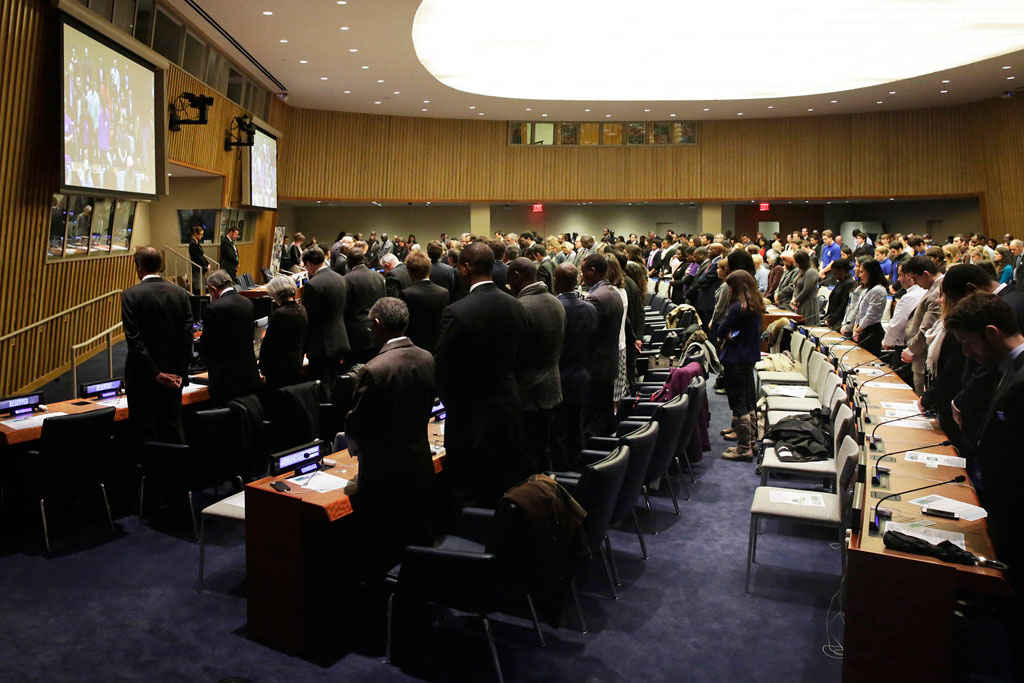 Participants at the 21st Commemoration of the Rwanda Genocide. Photo: Evan Schneider

“My Human Rights Up Front initiative seeks to prevent serious human rights violations by acting on early warning signs before they become more serious,” he explained, adding that his Special Advisers on the Prevention of Genocide and on the Responsibility to Protect work to advance national and international efforts to protect populations from atrocity crimes.

“We aim to ensure swift and decisive action to save lives and stop abuses,” stressed the UN chief.

“On this Day, I appeal to the international community to do more than just speak about atrocity crimes and then fail to take timely action to prevent them. I call on all to summon the courage to act before situations deteriorate based on our collective moral responsibility. This is critical for the maintenance of international peace and security,” he said, recalling that at last year’s commemoration in the Rwandan capital, Kigali, he had urged the world to exercise ‘Umuganda’– coming together in common purpose – “to avert what can be prevented and counter the cruelty taking place before our eyes.”

Later in the day, the Secretary-General delivered remarks to the 21st Commemoration of the Rwanda Genocide Memorial Ceremony at UN Headquarters, where he called for a moment of silence. Mr. Ban said the Rwanda genocide was a source of “unbearable pain for the country – and unmistakeable disgrace for the world, including the United Nations.”

“I will never forget the images I saw at the Gisozi Memorial of babies who were killed in their mothers’ arms… youth cut down in the prime of their lives... whole families slaughtered,” he said.

“Our reflection on the Rwandan tragedy should go beyond one country and one moment in history. We have to take a hard look at the present. From Iraq and Syria to the Central African Republic, South Sudan and beyond, we see alarming abuses of people’s rights – especially the right to life,” Mr. Ban emphasized.

It is not enough to condemn atrocity crimes once they are occurring, he said, calling on the world to act much earlier to prevent them and to protect and put human rights up front.

Also addressing the event, Nicholas Emiliou, Permanent Representative of Cyprus speaking on behalf of Sam Kutesa, President of the General Assembly, said it was the responsibility of the global community to ensure that such horrific crimes never take place again.

“We must use the lessons learned in Rwanda to prevent such events from ever taking place again, anywhere in the world. We must learn from our failures in Rwanda; bearing in mind the dire consequences of indifference or failing to act in cases of suspected mass atrocities,” he said.

Mr. Kutesa welcomed the adoption by the Security Council of resolution 2150 (2014) which called on Members States to recommit to prevent and fight against genocide and other serious crimes under the international law. Those responsible for mass killings or genocide must be held accountable for their actions in order to end impunity and ensure justice for the victims.

An increasing number of Member States and regional organizations have also created mechanisms to prevent genocide and prosecute those responsible for carrying out such crimes.

“Let us use this day of remembrance as an opportunity for reflection on how to collectively ensure that such horrific events as the genocide in Rwanda never, ever happen again,” he added.

Organized by the UN Department of Public Information, in cooperation with the Permanent Mission of Rwanda to the United Nations, the programme also included, among others, Eugène-Richard Gasana, Ambassador of Rwanda and Minister in Charge of Cooperation.

In a Security Council meeting today in which Member States reaffirmed their commitment to the United Nations Charter, the Secretary-General said the UN was an Organization with major achievements to its credit, multiple crises on its agenda, and tremendous opportunities ahead.