The United Nations refugee agency today expressed concern that people needing international protection are being blocked from entering the European Union, citing the deaths of two Iraqi men who were in a group of 12 Yazidi people allegedly beaten by Bulgarian border guards.

“With few legal alternatives to enter the European Union, many people fleeing conflict and persecution are undertaking increasingly dangerous journeys and using smugglers to reach safety,” William Spindler, a spokesman for the Office of the UN High Commissioner for Refugees (UNHCR), told a news briefing.

“It is deeply disturbing that people in search of international protection are being turned away, often with violence. EU member States at the external border need to ensure that these practices stop, and should conduct independent and transparent investigations into allegations of abuses and illegal practices in their border regions.”

The statement followed a recent incident in which UNHCR was told 12 Iraqis belonging to the Yazidi minority were stopped by Bulgarian border guards as they tried to enter from Turkey. The Iraqis had their belongings seized and were badly beaten. The group scattered and two of the men, suffering from severe injuries, died later of hypothermia on the Turkish side of the border. According to the reports, a third person was taken in a critical condition to a hospital in Edirne after Turkish authorities were alerted.

“UNHCR urges the authorities in Bulgaria and Turkey to investigate this grave incident,” Mr. Spindler said. “We are particularly disturbed by the accounts of brutality which may have contributed to the deaths of two people who, being members of the persecuted Yazidi community, were likely to have been refugees.”

Information gathered by UNHCR in 2014 indicated that people seeking international protection often attempted to cross the border into Bulgaria multiple times, but had to turn back because of bad weather, were abandoned by people smugglers paid to take them across the border, or were intercepted by Turkish authorities.

Many, however, reported being denied entry or being “pushed back” by Bulgarian border guards. “Push-backs” are not in conformity with Bulgaria’s obligations to admit asylum-seekers to their territory. The use of violence has also been reported and, in many cases, people say their money and property were confiscated by border police.

Bulgaria is also planning to add 82 kilometres of razor-wire fences to an existing 33-kilometre fence constructed in 2014 in response to increased irregular arrivals, the majority from Syria. Efforts to reduce the number of irregular arrivals and asylum-seekers in Bulgaria had a significant effect in 2014, with almost 50 percent less arrivals than the previous year.

According to Bulgarian authorities, over 38,500 people attempted to cross irregularly the Bulgaria-Turkey border in 2014. Some 6,000 of them – mostly Syrians, Afghans and Iraqis – reached Bulgaria. This is a significant drop from 11,500 irregular arrivals – out of over 16,700 attempts – registered in 2013.

Elsewhere, UNHCR has raised concerns over reports of border practices that could place refugees and migrants at risk, notably in Greece, where UNHCR has documented numerous accounts of "push-backs" at the land and sea borders with Turkey, especially in the last two years. 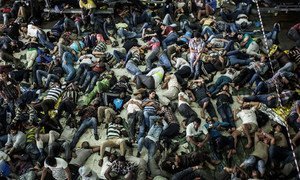 The wars in Syria and Iraq, as well as armed conflicts, human rights violations and deteriorating security and humanitarian conditions elsewhere, has pushed the number of people seeking asylum in industrialized countries to the highest level since 1992 at the beginning of the conflict in Bosnia and Herzegovina, according to a United Nations report released today.