Grave violations of children’s rights are continuing to take place in Yemen, the United Nations Children’s Fund (UNICEF) confirmed today, on the heels of a spate of recent attacks on mosques in Sana’a that killed 12 children and injured 20.

During an emergency meeting of the Security Council held on Sunday, UN Special Adviser Jamal Benomar warned that Yemen stands on the brink of civil war amid deepening political tensions. Despite UN efforts to bring about a peaceful political resolution, Yemen has continued to be plagued by violence and mass political demonstrations.

Mr. Boulierac said that Yemeni children are exposed to a number of dangers, including mines, drones, suicide attacks and sexual violence. UNICEF is appealing to all parties in the conflict to spare schools, hospitals and civilian targets. It is also asking for an immediate halt to the recruitment of children and immediate assistance to those in need.

The current crisis in Yemen has also had a disastrous effect on the economy. Social welfare funds are frozen, with no payments made since the beginning of the year, affecting large swathes of the population. Beneficiaries of the Social Welfare Fund, which covers 35 per cent of the population, have not received their payments since January this year.

UNICEF and its partners on the ground continue to provide vaccines to children, construct child friendly schools, provide psychosomatic support to children in distress, and provide therapeutic food to mothers and children who are malnourished.

Mr. Boulierac also said that the provision of vaccines has been secured for the following two months only, and that the Government is not in a position to pay for subsequent months, putting many children who have not been vaccinated at risk. Vaccine stocks and storage are at risk of being damaged, as well. This month UNICEF paid the fuel to avoid a disruption, as the Government was unable to.

An estimated 200,000 children have been affected by attacks or closure of schools. Girls are most affected, as parents decide to keep their children at home due to insecurity and poverty.

UNICEF added that it needs $60 million in 2015 to respond to the needs of mothers and children in Yemen. 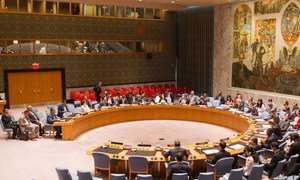