UNDP/Arjan van de Merwe
The link between disaster risk reduction and health has been underscored by crises such as the Malawi floods.
15 March 2015

The Ebola outbreak in West Africa, powerful storms in the Asia-Pacific region and ongoing conflicts in Syria and elsewhere are all stark reminders that health and stronger health system capacities must be central to the new framework for managing disaster risk currently being discussed in Sendai, Japan, senior United Nations health agency officials emphasized today.

“If we're going to come out of emergencies in good shape, we're going to have to go into them with healthier, more resilient populations,” said Dr. Bruce Aylward, Assistant Director General for Emergencies at the UN World Health Organization (WHO), briefing reporters in Sendai at the Third World Conference on Disaster Risk Reduction.

Noting that the aim of the current conference, which opened yesterday and wraps up Wednesday 18 March, is to agree a new set of measures for managing disaster risk to reduce mortality and curb economic losses and which will succeed the landmark 2005 Hyogo Framework for Action (HFA), Dr. Aylward said thus far, health appears to be featuring very prominently in the current negotiations.

“This framework is very different from what we saw in Hyogo because its not just about protecting people's health but the recognition that health is at the very centre of disaster risk reduction, he said, alongside Ciro Ugarte, Director, Emergency Preparedness and Disaster Relief at WHO's Regional Office for the Americas, Alex Ross, Director of WHO's Kobe Centre, and Remi Sogunro, UN Population Fund (UNFPA) Officer-in-Charge in Liberia.

“Health and disaster risk reduction are deeply connected; healthy people are resilient people and resilient people recover more quickly from disasters,” continued Dr. Aylward, who is also Special Representative to the WHO Director General on Elba, stressing that while the HFA had included only three references to health, the current framework contained some 30 mentions and spoke specifically to risks associated with epidemics and pandemics.

West Africa's current Ebola crisis, along with Typhoon Haiyan, which wreaked havoc in the Philippine archipelago in 2013, and ongoing conflict in countries such as Syria and the Central African Republic have all made it plainly clear that health must be a central concern.

He said that WHO is uniquely placed within the UN system to ensure the new framework deals effectively with health matters. In Sendai, the agency will spotlighting several key initiatives, including: a policy framework WHO and its regional partners had put together to help them take the post-2015 framework and translate it into concrete actions for ministries of health; and efforts to ensure multi-hazard early warning measures and capacities are bolstered to be able to detect, report and respond to disease outbreaks and pandemics quickly and more effectively.

The agency has also fast-tracked its 'hospital safety index' to be ready for launch in Sendai. This tool, explained Dr. Aylward, lays out 151 specific indicators for governments and health ministries. It provides a snapshot of the probability that a hospital or health facility will continue to function in emergency situations, based on structural, nonstructural and functional factors, including the environment and the health services network to which it belongs.

Here, he noted that when Typhoon Ruby struck the Philippines last year, no medical facilities had been lost, largely because of lessons learned and measures put in place after Haiyan, which had destroyed some 600 health facilities.

“But this is about more than buildings,” Dr. Aylward said, stressing that managing disaster risk also includes ensuring entire health systems can function properly and effectively in the wake of crisis, outbreaks or pandemics.

Echoing this, Mr. Ugarte said the WHO index and similar measures aimed to address the real fact that in many cases, hospitals are lost exactly when critical services are needed. “We have to move from theory to practice,” he continued, adding that efforts should be made, as had been the case in Japan in the wake of multiple natural disasters, to focus on the facilities that will have to remain operational “no matter what.” 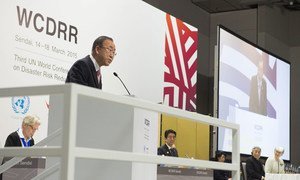