UNHCR/F. Noy
Tens of thousands of desperate people are attempting to cross the Mediterranean and reach Europe in dangerous boats like these in Libya.

12 March 2015
The United Nations refugee agency announced today that it has sent a letter to the European Union asking for a robust search-and-rescue operation in the Mediterranean Sea as part of a number of “bold and innovative” solutions to prevent more refugees and migrants losing their lives at sea.

So far this year, around 470 people have died or gone missing in the Mediterranean as they undertake perilous journeys to seek safety, compared to 15 in the same period last year, according to the Office of the UN High Commissioner for Refugees (UNHCR).

The new proposals were made by High Commissioner António Guterres in a letter to the European Union.

“We are proposing to the European Union and countries in Europe a number of bold and innovative solutions to address the challenges of mixed migration in the Mediterranean and reduce the number of people losing their lives at sea,” Vincent Cochetel, UNHCR’s Director for Europe, said in a news release.

“To continue with the status quo is not an option,” Mr. Cochetel said, “inaction to address these challenges will only mean more people dying.”

UNHCR said its proposals include the establishment of a robust European search-and-rescue operation in the Mediterranean, similar to the Italian Mare Nostrum operation which came to an end last year, and to set up an EU scheme to compensate shipping companies for losses incurred while rescuing people in distress at sea.

The agency is also urging the EU to explore solutions to address challenges once refugees arrive in Europe, ensuring adequate support for them and avoiding a few countries having to shoulder the main responsibility for them.

UNHCR said it is proposing a pilot project for the relocation of Syrian refugees who are rescued at sea in Greece and Italy to different countries across Europe, based on a fair distribution system.

Currently, Germany and Sweden alone have received around 56 per cent of all Syrian asylum applications since the conflict started. This pilot project would seek a better distribution of Syrians recognized as refugees, among all countries in the EU, and also contribute to reduce the risk of trafficking and exploitation linked to the current onward movements within the EU.

“As anti-foreigner rhetoric echoes through Europe, it is important that we remember that refugees are fleeing war and violence in places such as Syria,” said Mr. Cochetel.

“UNHCR’s proposal includes also efforts to ensure that solid national integration support programmes are developed, and that refugees receive the support they need to contribute to our societies,” he said. 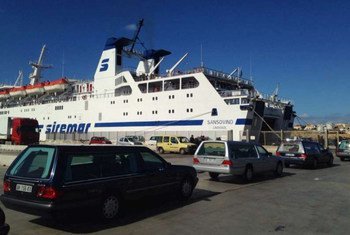 12 February 2015
The top United Nations official for refugee issues today urged the European Union (EU) to change its approach to dealing with irregular crossings of the Mediterranean Sea and make saving lives the topmost priority following the death earlier this week of some 300 people fleeing Libya on four dinghies.