Following elections, a historic opportunity has now presented itself for Sri Lanka to set up a domestic process that is credible, accountable and up to par with international norms and standards for the benefit of the country's people, with the help of the wider international community, the United Nations political chief said today.

Back from his visit to the nation, UN Under-Secretary-General for Political Affairs, Jeffrey Feltman spoke to reporters at a Headquarters press briefing this afternoon and expressed confidence over efforts towards reconciliation and cooperation. He said that the 8 January national elections demonstrated the people's resolve to share in the future of their country.

“The meetings and talks with the Government of Sri Lanka are so different than they used to be, so that leads us to greater expectations…There was suffering across all Sri Lanka, every community suffered and accountability must address the grievances in the North, but also allow that all [people] in Sri Lanka feel like all their concerns are being addressed,” he said.

During those meetings, Mr. Feltman said he expressed Secretary-General Ban Ki-moon's support to the country and pledged continuous UN cooperation in mending relations and building trust between the Government and the people in line with the 2009 Joint Communiqué of the UN and Sri Lanka.

“I encourage the Government to take some immediate steps that are feasible – things like the release of army-held land in the North to demonstrate the commitment of governments to follow through,” the Under-Secretary General emphasized, noting that “Sri Lankans have suffered a great deal” and despite the efforts of commissions of inquiry, “the list of suffering remains long.”

The Government was vocal with Mr. Feltman about its plans to conform this process to international norms but has also pledged its commitment to reconciliation before the UN Human Rights Council in Geneva. By doing so, the Government has “put itself under a spotlight” but clearly more will be needed than just words. In terms of accountability, Sri Lanka's Government will report back to [the Council] on steps taken to establish this domestic process.

Mr. Feltman said “without question” there still is distrust between groups, but all stakeholders must work together. He noted that he had heard scepticism, especially in the North of the country, on whether the Government will live up to its commitment. But nevertheless, he said, “I left with the confidence that the intention to do this is real. The UN stands ready to provide technical assistance, if it is needed. “This is important for the people of Sri Lanka,” Mr. Feltman added.

When the floor was opened for questions, he said on the persecution of Muslims in Myanmar that he had been in that country recently for a seminar for Association of South-East Asian Nations (ASEAN). The discussions were mostly focused on peace and security but the question of the Muslims in the country came up in all of his meetings, during which he expressed UN concern and the Secretary-General's strong commitment to seeing the issue addressed.

On Yemen, Mr. Feltman said that a military solution is not the “right approach,” emphasizing that it would be “catastrophic” for civilians who have already endured a great deal of suffering. The only way to reunite the country is through due process. The Security Council has spoken out in favour of the Gulf Cooperation Council (GCC) talks moving forward.

Answering a question on the Israel and Palestinian situation, Mr. Feltman said that the ongoing tension stems from “really deep frustration” of how long people have been talking about a two-State solution without the realization of such an agreement. The Secretary-General still believes in a two-State solution because when you look at the alternatives, everything looks worse, Mr. Feltman said.

On trying to restore and help reverse the position of the Palestine Liberation Organization (PLO) on security cooperation with Israel, he called it an example of a “very disturbing trend” where one side takes unilateral measures provoking the other side to do something else. Rather, Israelis and Palestinians should take steps to move forward, he said, calling on parties to rethink these sorts of unilateral decisions that risk the unravelling of Palestinian Authority. The UN support aims to try to unite the Palestinian Government in a way that is helpful to get back to a two-state solution negotiations.

When asked whether a UN peacekeeping mission to Ukraine would be useful, Mr. Feltman said that decision is within purview of the Security Council. Implementation of the Minsk Accord gives a strong role to the Organization for Security and Cooperation in Europe (OSCE). Right now, the UN is looking how to best assist OSCE in doing the job it has been mandated to perform by the signatories of the Minsk Agreement. What is promising about that the Minsk accord is that it gets the international community away from concentrating on a military solution and focused more on a reform agenda and decentralization.

On Syria, the UN political chief said that it is to keep in mind the suffering of Syria people who have been subjected to “unspeakable horrors” in the last four years. He highlighted the proposal of UN Special Envoy for Syria Staffan de Mistura to “freeze” the conflict in Aleppo as a way to alleviate the suffering and pave the way for broader political discussions. This has not been going easily or “swimmingly well,” but it remains the goal. 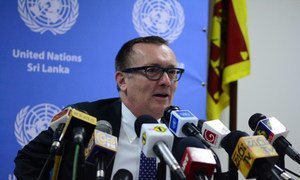 The United Nations will stand with the people and leaders of Sri Lanka as the country forges ahead along the path to reconciliation, the Organization’s top political official said today, as he voiced encouragement at the Government’s ongoing commitment to promote accountability and human rights following the nation’s three decade-long civil war.