The Secretary-General has strongly condemned the deadly terrorist attack that took place today in Bamako, Mali, today, which resulted in the deaths of five civilians and seven injuries.

Among the injured were two international experts working for the United Nations, Mr. Ban said in a statement released this evening and the Secretary-General joined members of the Security Council in expressing their deepest condolences to the families of the victims.

Both Mr. Ban and the Security Council called on the Government of Mali to swiftly investigate the attack and bring the perpetrators to justice, stressing that those responsible for the attack should be held accountable, and reaffirming the need to combat by all means, in accordance with the Charter of the United Nations, threats to international peace and security caused by terrorist acts.

The Security Council reaffirmed that acts of terrorism are criminal and unjustifiable, regardless of their motivation, wherever, whenever and by whomsoever committed, reminding States that they must ensure that measures taken to combat terrorism comply with all their obligations under international law, in particular international human rights, refugee and humanitarian law.

Members also reiterated its support for the Special Representative of the Secretary-General in Mali and MINUSMA to assist the Malian authorities and the Malian people in their efforts to bring lasting peace and stability to their country, as mandated by the Security Council in resolution 2164 (2014). 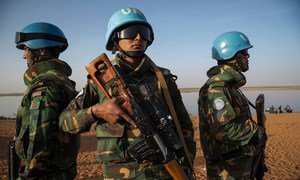 Secretary-General Ban Ki-moon has welcomed the progress made towards the establishment of an inclusive peace in Mali in an effort to resolve the country's ongoing crisis, the United Nations spokesperson confirmed today.