Women earn on average 77 per cent of what men earn, the United Nations labour organization said today, noting that “without targeted action, pay equity between women and men will not be achieved before 2086, or at least 71 years from now.”

“Are working women better off today than they were 20 years ago?” asked Director-General of the International Labour Organization (ILO) Guy Ryder in a press release ahead of Sunday’s International Women’s Day, marked annually on 8 March.

“The answer is a qualified yes. Has this progress met our expectations? The answer is a decidedly no. We need to be innovative, to reframe the debate and to intensify the focus on ensuring the rights of women at work,” he declared.

Progress in implementing the Declaration and Platform for Action adopted at the Fourth World Conference in Women in Beijing in 1995 has been mixed, the ILO said in a briefing note, on the heels of also releasing a new report that found that the “motherhood pay gap” that “imposes a wage penalty often over and above the age gap already experienced by women worldwide.”

According to The motherhood pay gap: A review of the issues, theory and international evidence, mothers often earn less than women without children. Despite policy and international labour standard adjustments, women continue to experience widespread discrimination and inequality in the workplace.

“The overriding conclusion 20 years on from Beijing is that despite marginal progress we have years, even decades to go until women enjoy the same rights and benefits at work,” said Shauna Olney, Chief of the Gender and Equality and Diversity Brand of the ILO.

In developed countries, the wage gap increases when a woman has more than one child. In developing countries, however, girls and young woman are more like than their male counterparts to be kept at home to help with household and caring tasks. And across both poor and rich nations, violence against women remains a major factor undermining their access to decent work.

“In most parts of the world, women are often in undervalued and low-paid jobs; lack access to education, training, recruitment; have limited bargaining and decision-making power; and still shoulder responsibility for most unpaid care work,” said the ILO note.

The good news is that more countries are recognizing men’s care responsibilities – the number of countries providing some type of paternity leave has doubled from 38 per cent in 1994 to 56 percent in 2013.

But despite this, “women continue to shoulder most of the responsibility for family care, often limiting their access to paid employment completely, or confining them to part-time positions, which are typically not as well paid,” the ILO said.

Today women own and manage over 30 per cent of all businesses but tend to be concentrated in small enterprises. On a more macro level, women sit on 19 per cent of board seats globally, and hold only five per cent of CEO positions at the world’s largest companies. 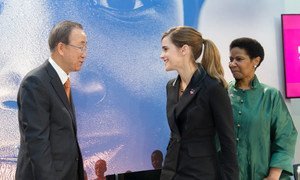