The head of the United Nations agency mandated to defend press freedom today denounced the killing of Colombian journalist Luis Carlos Peralta Cuéllar in the “strongest possible terms” and urged local authorities to do their “utmost” to bring the perpetrators to justice.

“Press freedom is one of the pillars of democracy and good governance,” Irina Bokova, Director-General of the UN Educational, Scientific and Cultural Organization (UNESCO), declared in a press release. “Journalists must be able to exercise their profession without fearing for their lives.”

According to UNESCO, Mr. Cuéllar was the owner and director of the Linda Stereo radio station and regularly reported on corruption. The 63-year old journalist had received several threats to his life until he was killed on 14 February near his home in El Doncello, south-western Colombia, in what Ms. Bokova described as a “heinous crime.”

In a report released in March 2014, UNESCO stressed the growing trend of media workers being killed around the world. Focusing on the latest challenges affecting media development and freedom of expression, the report, called “World Trends in Freedom of Expression and Media Development,” noted that more than 430 journalists were killed between 2007 and 2012.

UNESCO chief condemns killing of journalists in Brazil and Haiti 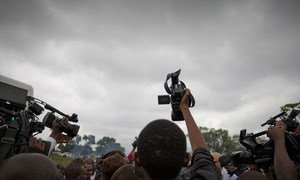 'Stand up for justice', UN urges on first Day to End Impunity for Crimes against Journalists

Protecting the safety of journalists and ensuring that crimes committed against them don't go unpunished is ever-more important in today's changing times in order to build transparent societies and keep citizens around the world informed, the United Nations said today marking the first-ever International Day to End Impunity for Crimes against Journalists.