Partnerships involving Government, the private sector, civil society, academia and philanthropic organizations will prove central to implementation of the new development agenda, the President of the United Nations Economic and Social Council said this morning as he opened a special event on Multi-Stakeholder Partnerships at UN Headquarters in New York.

“The Council has, for a number of years, placed increased emphasis on ways in which to mobilize such partnerships,” said Martin Sajdik, President of ECOSOC. “We must continue to expand this important collaboration as we transition to a new set of development goals.”

In September 2015, the United Nations will adopt a new transformative development agenda that will focus on people and the planet and be grounded in human rights. It has been agreed in principle that multi-stakeholder partnerships will play an important role in implementation.

The half-day event aimed at discussing ways in which multi-stakeholder partnerships could best align with and support the goals and targets of the post-2015 development agenda, as well as the type of sustainable framework and platform for reviewing progress that will be required.

Mr. Sajdik said partnerships had become increasingly integral to the UN’s work, “mushrooming” over the past two decades, and taking many different forms. While they were important on the global level, it was also essential to make them work at the national level.

“As we look for new and innovative ways in which to harness the potential benefits of multi-stakeholder partnerships, we have to ask ourselves how such partnerships should look like and how to best link them to the Post-2015 development agenda,” he said.

At the same time, he noted that is conscious of the need to avoid having too many different implementation and review mechanisms, as that could turn out counterproductive and negatively affect oversight.

Following Mr. Sajdik’s opening remarks, a set of panel discussions on partnerships went ahead, the first of which provided insights and perspectives on ways to align multi-stakeholder partnerships with the post-2015 development agenda. 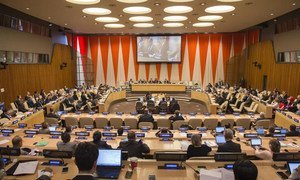