UNMEER/Kennei Momoh
This motorbike has crossed the border from Sarkonedou in Liberia to Koutizou in Guinea. The opening of Liberia’s official borders enables economic activities and allows students to attend school.
26 February 2015

Both WHO and UN Mission for Ebola Emergency Response (UNMEER) also noted unsafe burials of those who died from the disease posed as a challenge and that “a significant number” of individuals are still either unable or reluctant to seek treatment for Ebola, which has affected over 23,500 people and killed more than 9,500 mainly in the Guinea, Liberia and Sierra Leone.

In its latest update issued Wednesday afternoon, WHO reported that new cases in Guinea continued to arise from “unknown chains of transmission” and that transmission remained “widespread in Sierra Leone” but transmission continued at very low levels in Liberia, with 1 new confirmed case reported in the 7 days to 22 February associated with a known chain of transmission.

“Engaging effectively with communities remains a challenge in several geographical areas,” WHO said in its most recent update

Nearly one-third of prefectures in Guinea reported at least one security incident in the week to 22 February, often as a result of rumours and misinformation linking response efforts with the spread of EVD [Ebola Virus Disease], according to WHO.

The Secretary-General’s Special Envoy on Ebola, Dr. David Nabarro, last week told the UN General Assembly that the final phase of “getting to zero” cases may well be the hardest, saying the hunt to track down the virus is “like looking for needles in haystacks.”

Dr. Nabarro told reports that having strong surveillance capabilities on the ground to identify people with Ebola, to confirm diagnosis, to quickly arrangement arrange effective treatment, to identify people that are their contacts and to keep those people under review for 21 days “is a really difficult task.”

UNMEER also reported today that border between Guinea and Liberia reopened to the public on Wednesday after months of closure. 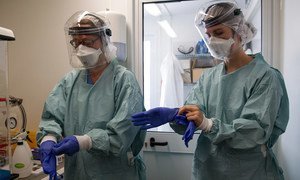 The United Nations World Health Organization (WHO) today announced that it has approved for use a rapid diagnostic test kit for Ebola that can provide results in 15 minutes and correctly identify 92 percent of patients infected by the disease that has killed more than 9,400 people, mainly in West Africa.