Secretary-General Ban Ki-moon and the United Nations Security Council have joined the head of the UN Assistance Mission in Somalia (UNSOM) in strongly condemning today's deadly terrorist attack on the Central Hotel in Mogadishu, which was claimed by Al-Shabaab.

The attack resulted in the death and injury of dozens of people, including senior members of the Somali Federal Government, said the UN officials, adding that many of those killed and wounded were gathered for Friday prayers.

In a statement issued by his spokesperson in New York, Mr. Ban expressed his deepest condolences to the Government of Somalia and the families of those killed, and wished the injured swift recovery. He also paid tribute to the Somali security forces that brought the situation under control.

“The Secretary-General also reaffirms the strong resolve of the United Nations to continue supporting the people and Government of Somalia, who are working to rebuild peace and prosperity in their country,” the UN chief in his statement, adding that the attacks could not deter the collective will of the Somali people to move forward, or the commitment of the United Nations.

In a separate statement, the Security Council reaffirmed that terrorism in all its forms and manifestations constitutes one of the most serious threats to international peace and security, and that any acts of terrorism are criminal and unjustifiable regardless of their motivation, wherever and whenever and by whomsoever committed.

Also condemning the attack, UNSOM chief Nicholas Kay said such an indiscriminate attack against the Somali people “is a cruel and despicable crime intended to rob Somalis of their hope for a better future.”

Yet he stressed that despite such inhuman atrocities, Somalis are successfully rebuilding their Government institutions and security forces after more than two decades of state failure and conflict.

Mr. Kay, who is also the Special Representative of the Secretary-General, said the United Nations in Somalia remained resolute in its support for the Somali people and would continue working to help Somalis realise their hopes and aspirations for a peaceful and stable future.

He also offered sincere condolences to the families and friends of those who lost their lives in the attack, and to the people and Federal Government of Somalia. 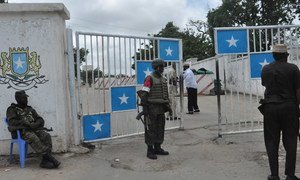 The United Nations has urged the new Somali Government to move quickly to deliver on its ‘Vision 2016’ agenda following the approval of a Cabinet that hat includes enhanced participation of women ministers.