UN Photo/Eskinder Debebe
Under-Secretary-General for Political Affairs, Jeffrey Feltman, briefs the Security Council at its meeting on the situation in the Middle East, including the Palestinian question.

18 February 2015
Briefing the United Nations Security Council after “another tumultuous and deadly month” in the Middle East, the Under-Secretary-General for Political Affairs, Jeffrey Feltman, warned that further escalation remains possible in the conflict between Israelis and Palestinians and could be highly damaging to both parties and to the two-State solution.

“We see the circumstances in Gaza as becoming increasingly worrisome as we approach the six-month mark since the end of last summer's conflict,” said Mr. Feltman. “The combination of the failure to rectify the persistent governance and security issues and the slow pace of reconstruction has created an increasingly toxic environment.”

For a comprehensive peace, a priority had to be establishing a framework to get there, he urged. The international community, possibly through a reinvigorated diplomatic Quartet, could help parties to avoid a downward slide and support a return to negotiations. While the UN would continue its active role in supporting such efforts, international efforts could not succeed in isolation.

“A genuine and lasting peace can only be reached by the commitment of the parties to overcome their mistrust and make the difficult Compromises necessary to achieve a resolution to this conflict,” Mr. Feltman stressed.

Pointing to a total of $200 million withheld by the Israeli Government, the Palestinian Authority faced acute fiscal challenges, and economic activity had contracted in 2014 for the first time since 2006.

“Paralyzing the Palestinian Authority from conducting essential Government business - including functions related to health services and law and order – is in no one's interest,” said Mr. Feltman. “Israel's action is a violation of its obligations under the Paris Protocol of the Oslo Accords and we, again, call for an immediate reversal of this decision.”

Parties to the conflict had primary responsibility to resolve issues but a key component of reversing negative trends would be implementation by the international community of financial commitments made at the Cairo Conference. The current failure to deliver the necessary support put an almost “unbearable strain” on an already highly fractious environment, he said.

“Four months after the Cairo Conference, donors have yet to fulfil the majority of their pledges,” Mr. Feltman said. “This is, quite frankly, unacceptable, and cannot continue if we hope to avoid another escalation in Gaza.”

He drew attention to the joint letter appealing to donors to honour their financial commitments without further delay, with UN Relief and Works Agency for Palestine Refugees in the Near East (UNRWA) in need of $100 million and support also needed for other UN agencies. The UN had partnered with the Government of Palestine to launch the Strategic Response Plan for 2015, requesting $705 million aiming to meet the humanitarian needs of 1.6 million Palestinians, with 75 per cent of the Plan dedicated to Gaza.

In addition, the temporary Gaza Reconstruction Mechanism was “functioning and delivering concrete results,” he said, pointing to 50 construction projects that were under consideration, including 18 already approved, and to 47,000 people cleared, out of a total of 75,000, to receive construction material for shelter repairs.

The Under-Secretary-General also drew attention to the situation in the occupied West Bank, where one Palestinian was killed and 156 injured, including 31 children and five women, by Israeli security forces. Four members of the Israeli security forces were injured during the same period and 12 passengers were stabbed on a commuter bus in Tel Aviv, while clashes between Palestinians and Israeli settlers continued.

He noted demolition of Palestinian structures in the West Bank, including in East Jerusalem, and urged Israel to cease such demolitions in East Jerusalem and Area C and to facilitate international assistance to vulnerable communities.

“We are deeply disappointed by Israeli authorities’ decision to issue on 30 January tenders for the construction of some 450 residential units in West Bank settlements, at a time when the situation is extremely volatile,” Mr. Feltman said.

As well as discussing the Israeli-Palestinian conflict, Mr. Feltman also noted the Secretary-General’s concern about violations of the 1974 Agreement on Disengagement between Israeli and Syrian forces in January, and a serious breach of the cessation of hostilities between Lebanon and Israel on 28 January, which resulted in the death of a UN Interim Force in Lebanon (UNIFIL) peacekeeper serving in the Spanish contingent. He added that UNIFIL was in the process of finalising its investigation of the incident with the cooperation of both parties.

Elsewhere in Lebanon, the border with Syria remains impacted by security incidents and cross-border fighting, Mr. Feltman noted. He was concerned over the “prolonged vacuum” in the office of president in the country and said the Secretary-General looked to the Security Council to preserve Lebanon from the impact of conflicts in the region and help it to address the multiple challenges it faces. 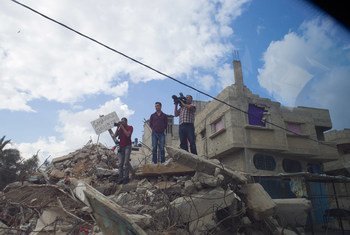 12 February 2015
The United Nations Resident and Humanitarian Coordinator for the occupied Palestinian territory today launched an appeal to boost funding for more than a million Palestinians who continue to face grim conditions on the ground and an uncertain future.